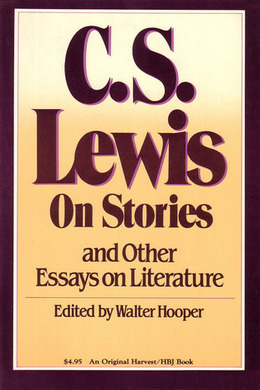 C.S. Lewis is widely known for his fiction, especially his stories of science fiction and fantasy, for which he was a pioneering author in an age of realistic fiction. He lays out his theories and philosophy on fiction over the course of nine essays, including this one, On Stories. Along with discussing his own fiction, Lewis reviewed and critiqued works by many of his famous peers, including George Orwell, Charles Williams, Rider Haggard, and his good friend J.R.R. Tolkien, providing a wide-ranging look at what fiction means and how to craft it from one of the masters of his day.

It is astonishing how little attention critics have paid to Story considered in itself. Granted the story, the style in which it should be told, the order in which it should be disposed, and (above all) the delineation of the characters, have been abundantly discussed. But the Story itself, the series of imagined events, is nearly always passed over in silence, or else treated exclusively as affording opportunities for the delineation of character. There are indeed three notable exceptions. Aristotle in the Poetics constructed a theory of Greek tragedy which puts Story in the centre and relegates character to a strictly subordinate place. In the Middle Ages and the early Renaissance, Boccaccio and others developed an allegorical theory of Story to explain the ancient myths. And in our own time Jung and his followers have produced their doctrine of Archtypes. Apart from these three attempts the subject has been left almost untouched, and this has had a curious result. Those forms of literature in which Story exists merely as a means to something else–for example, the novel of manners where the story is there for the sake of the characters, or the criticism of social conditions–have had full justice done to them; but those forms in which everything else is there for the sake of the story have been given little serious attention. Not only have they been despised, as if they were fit only for children, but even the kind of pleasure they give has, in my opinion, been misunderstood. It is the second injustice which I am most anxious to remedy. Perhaps the pleasure of Story comes as low in the scale as modern criticism puts it. I do not think so myself, but on that point we may agree to differ. Let us, however, try to see clearly what kind of pleasure it is: or rather, what different kinds of pleasure it may be. For I suspect that a very hasty assumption has been made on this subject. I think that books which are read merely ‘for the story’ may be enjoyed in two very different ways. It is partly a division of books (some stories can be read only in the one spirit and some only in the other) and partly a division of readers (the same story can be read in different ways).

What finally convinced me of this distinction was a conversation which I had a few years ago with an intelligent American pupil. We were talking about the books which had delighted our boyhood. His favourite had been Fenimore Cooper whom (as it happens) I have never read. My friend described one particular scene in which the hero was half-sleeping by his bivouac fire in the woods while a Redskin with a tomahawk was silently creeping on him from behind. He remembered the breathless excitement with which he had read the passage, the agonized suspense with which he wondered whether the hero would wake up in time or not. But I, remembering the great moments in my own early reading, felt quite sure that my friend was misrepresenting his experience, and indeed leaving out the real point. Surely, surely, I thought, the sheer excitement, the suspense, was not what had kept him going back and back to Fenimore Cooper. If that were what he wanted any other ‘boy’s blood’ would have done as well. I tried to put my thought into words. I asked him whether he were sure that he was not over-emphasizing and falsely isolating the importance of the danger simply as danger. For though I had never read Fenimore Cooper I had enjoyed other books about ‘Red Indians’. And I knew that what I wanted from them was not simply ‘excitement’. Dangers, of course, there must be: how else can you keep a story going? But they must (in the mood which led one to such a book) be Redskin dangers. The ‘Redskinnery’ was what really mattered. In such a scene as my friend had described, take away the feathers, the high cheek-bones, the whiskered trousers, substitute a pistol for a tomahawk, and what would be left? For I wanted not the momentary suspense but that whole world to which it belonged–the snow and the snow-shoes, beavers and canoes, war-paths and wigwams, and Hiawatha names. Thus I; and then came the shock. My pupil is a very clear-headed man and he saw at once what I meant and also saw how totally his imaginative life as a boy had differed from mine. He replied that he was perfectly certain that ‘all that’ had made no part of his pleasure. He had never cared one brass farthing for it. Indeed–and this really made me feel as if I were talking to a visitor from another planet–in so far as he had been dimly aware of ‘all that’, he had resented it as a distraction from the main issue. He would, if anything, have preferred to the Redskin some more ordinary danger such as a crook with a revolver.