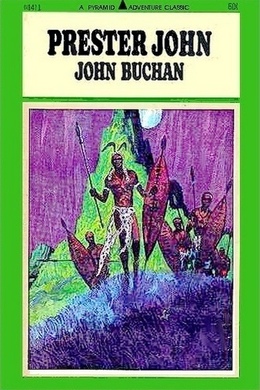 Nineteen-year-old David Crawfurd travels from Scotland to South Africa to seek his fortune as a store-keeper. On the voyage he encounters John Laputa, the celebrated Zulu minister, of whom he has strange memories. In his remote store David finds himself with the key to a massive uprising led by the minister, who has taken the title of the mythical priest-king, Prester John. David’s courage and his understanding of this man take him to the heart of the uprising, a secret cave in the Rooirand. This is a story of lost civilizations, hidden treasures, friendship and betrayal, lions and tigers, witch doctors, and just good old-fashioned adventure. John Buchan wrote Prester John, his sixth novel, in 1910, seven years after he returned from South Africa. It was his first to reach a wide readership across the world, and it established him as the writer of the fast-paced adventures for which he is famous.

I mind as if it were yesterday my first sight of the man. Little I knew at the time how big the moment was with destiny, or how often that face seen in the fitful moonlight would haunt my sleep and disturb my waking hours. But I mind yet the cold grue of terror I got from it, a terror which was surely more than the due of a few truant lads breaking the Sabbath with their play.

The town of Kirkcaple, of which and its adjacent parish of Portincross my father was the minister, lies on a hillside above the little bay of Caple, and looks squarely out on the North Sea. Round the horns of land which enclose the bay the coast shows on either side a battlement of stark red cliffs through which a burn or two makes a pass to the water’s edge. The bay itself is ringed with fine clean sands, where we lads of the burgh school loved to bathe in the warm weather. But on long holidays the sport was to go farther afield among the cliffs; for there there were many deep caves and pools, where podleys might be caught with the line, and hid treasures sought for at the expense of the skin of the knees and the buttons of the trousers. Many a long Saturday I have passed in a crinkle of the cliffs, having lit a fire of driftwood, and made believe that I was a smuggler or a Jacobite new landed from France. There was a band of us in Kirkcaple, lads of my own age, including Archie Leslie, the son of my father’s session–clerk, and Tam Dyke, the provost’s nephew. We were sealed to silence by the blood oath, and we bore each the name of some historic pirate or sailorman. I was Paul Jones, Tam was Captain Kidd, and Archie, need I say it, was Morgan himself. Our tryst was a cave where a little water called the Dyve Burn had cut its way through the cliffs to the sea. There we forgathered in the summer evenings and of a Saturday afternoon in winter, and told mighty tales of our prowess and flattered our silly hearts. But the sober truth is that our deeds were of the humblest, and a dozen of fish or a handful of apples was all our booty, and our greatest exploit a fight with the roughs at the Dyve tan–work.

My father’s spring Communion fell on the last Sabbath of April, and on the particular Sabbath of which I speak the weather was mild and bright for the time of year. I had been surfeited with the Thursday’s and Saturday’s services, and the two long diets of worship on the Sabbath were hard for a lad of twelve to bear with the spring in his bones and the sun slanting through the gallery window. There still remained the service on the Sabbath evening—a doleful prospect, for the Rev. Mr Murdoch of Kilchristie, noted for the length of his discourses, had exchanged pulpits with my father. So my mind was ripe for the proposal of Archie Leslie, on our way home to tea, that by a little skill we might give the kirk the slip. At our Communion the pews were emptied of their regular occupants and the congregation seated itself as it pleased. The manse seat was full of the Kirkcaple relations of Mr Murdoch, who had been invited there by my mother to hear him, and it was not hard to obtain permission to sit with Archie and Tam Dyke in the cock–loft in the gallery. Word was sent to Tam, and so it happened that three abandoned lads duly passed the plate and took their seats in the cock–loft. But when the bell had done jowing, and we heard by the sounds of their feet that the elders had gone in to the kirk, we slipped down the stairs and out of the side door. We were through the churchyard in a twinkling, and hot–foot on the road to the Dyve Burn. It was the fashion of the genteel in Kirkcaple to put their boys into what were known as Eton suits—long trousers, cut–away jackets, and chimney–pot hats. I had been one of the earliest victims, and well I remember how I fled home from the Sabbath school with the snowballs of the town roughs rattling off my chimney–pot. Archie had followed, his family being in all things imitators of mine. We were now clothed in this wearisome garb, so our first care was to secrete safely our hats in a marked spot under some whin bushes on the links. Tam was free from the bondage of fashion, and wore his ordinary best knickerbockers. From inside his jacket he unfolded his special treasure, which was to light us on our expedition—an evil–smelling old tin lantern with a shutter.