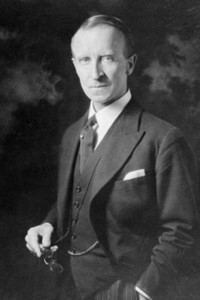 John Buchan, 1st Baron Tweedsmuir, was a British novelist and Unionist politician who, between 1935 and 1940, served as the Governor General of Canada. He was born and primarily educated in Scotland, and further schooled in England, obtaining a degree in Literae Humaniores, and befriending a number of influential future writers while studying at the University of Oxford. After a brief career in law, Buchan began writing and his political and diplomatic career, serving as a private secretary to the colonial administrator of various colonies in South Africa, and eventually wrote propaganda for the British war effort following the outbreak of the First World War. Once back in civilian life, Buchan was elected the Member of Parliament for the Combined Scottish Universities, but spent most of his time on his writing career. He is the author of The Thirty-Nine Steps and other adventure fiction. – Wikipedia

An imaginary conference is arranged by a multi-millionaire, Francis Carey, at a lodge, Musuru, located on the East Kenyan Plateau some 9000 feet above s...read more »

This is the epic story of one man’s courage. Adam Melfort is an officer and a gentleman. A brilliant career lies ahead of him until he is imprisoned for...read more »

A tale of kidnapping, politics, suspense-and rugby. When the agents of a foreign power are hunting a Scottish newspaper tycoon, exciting things can happ...read more »

Greenmantle is a tale of intrigue and adventure set during the First World War. It features Richard Hannay, hero of the author’s earlier novel The Thirt...read more »

Grey Weather is the first collection of sketches from John Buchan, author of The Thirty-nine Steps. The subtitle, Moorland Tales of My Own People, sets ...read more »

Dickson McCunn, a respectable, newly retired grocer of romantic heart, plans a modest walking holiday in the hills of south-west Scotland. He meets a yo...read more »

In this epic tale of a family torn asunder by a long-lasting feud, renowned action-adventure author John Buchan spins an engrossing account of two cousi...read more »

In 1745, Bonnie Prince Charlie’s rebel army is marching south into England. Alastair Maclean, one of the Prince’s most loyal supporters, is sent ahead t...read more »

When Richard Hannay, the hero of The Thirty-nine Steps, is recalled by the Head of British Intelligence from the Western Front at a critical moment in t...read more »

Nineteen-year-old David Crawfurd travels from Scotland to South Africa to seek his fortune as a store-keeper. On the voyage he encounters John Laputa, t...read more »

Andrew Garvald is a young Scottish merchant who has bravely come to make his fortune in a newly colonised America. Outlawed from Virginian society for o...read more »

The first novel by John Buchan is a fascinating insight into the themes that would continue to appear throughout all of his later work. Set in 17th cent...read more »

Buchan skillfully weaves the story of young clerk Peter Pentecost, who has a claim to the throne, and a tale of intrigue against King Henry VIII, where ...read more »

South America is the setting for this adventure from the author of ‘The Thirty-nine Steps’. When Archie and Janet Roylance decide to travel to the Gran ...read more »

Set in the bleak Yorkshire hamlet of Hungrygrain, this is a stirring tale of treason and romance. Anthony Lammas, minister and Professor of Logic at St ...read more »

Many of the aristocrats profiled in John Buchan’s novel The Half-Hearted are beset with crippling doubts about their own lifestyles and characters. Prot...read more »

The Republican Government of Evallonia is failing, and there is a throne waiting for someone. But there are two claimants, and each one is so strong tha...read more »

In this, his final adventure, Buchan’s hero Richard Hannay becomes embroiled in one of the most hazardous escapades of his life. Two men are honour boun...read more »

The Magic Walking Stick is a children’s short story by John Buchan. It tells the story of a teenage boy who buys a walking stick from a beggar - a magic...read more »

Dealing mainly with the mysterious and the inexplicable, these stories lead the reader through the weird, uncharted borderland swayed by the psychic sup...read more »

When his friend Charles Pitt-Heron vanishes mysteriously, Sir Edward Leithen is at first only mildly concerned. But a series of strange events that foll...read more »

Famous as the basis for several films, including the brilliant 1935 version directed by Alfred Hitchcock, The Thirty-Nine Steps is a classic of early tw...read more »

England is at peace after the end of World War I. Spy-catcher, Richard Hannay, is enjoying the country life at Fosse Manor. However, Hannay’s peace is s...read more »