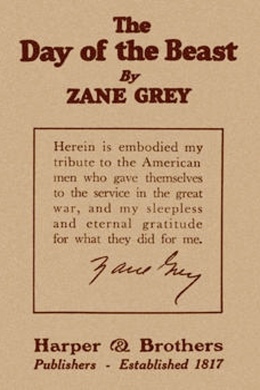 The Day of the Beast

Set in Middletown, USA, this tells the story of Daren Lane, who returns from World War I to a society of declining morals tired of hearing about the war. Time has marked them, and the battles of France have left them disabled, but what awaits them on land, beyond the empty dock? Who will be there for them, at home? And will they ever be able to lead a normal life? Zane Gray gives tribute to the unsung heroes of the Great War.

The ship glided slowly up the Narrows; and from its deck Daren Lane saw the noble black outline of the Statue of Liberty limned against the clear gold of sunset. A familiar old pang in his breast–longing and homesickness and agony, together with the physical burn of gassed lungs–seemed to swell into a profound overwhelming emotion.

“My own–my native land!” he whispered, striving to wipe the dimness from his eyes. Was it only two years or twenty since he had left his country to go to war? A sense of strangeness dawned upon him. His home-coming, so ceaselessly dreamed of by night and longed for by day, was not going to be what his hopes had created. But at that moment his joy was too great to harbor strange misgivings. How impossible for any one to understand his feelings then, except perhaps the comrades who had survived the same ordeal!

The vessel glided on. A fresh cool spring breeze with a scent of land fanned Lane’s hot brow. It bore tidings from home. Almost he thought he smelled the blossoms in the orchard, and the damp newly plowed earth, and the smoke from the wood fire his mother used to bake over. A hundred clamoring thoughts strove for dominance over his mind–to enter and flash by and fade. His sight, however, except for the blur that returned again and again, held fast to the entrancing and thrilling scene–the broad glimmering sun-track of gold in the rippling channel, leading his eye to the grand bulk of America’s symbol of freedom, and to the stately expanse of the Hudson River, dotted by moving ferry-boats and tugs, and to the magnificent broken sky-line of New York City, with its huge dark structures looming and its thousands of windows reflecting the fire of the sun.

It was indeed a profound and stirring moment for Daren Lane, but not quite full, not all-satisfying. The great city seemed to frown. The low line of hills in the west shone dull gray and cold. Where were the screaming siren whistles, the gay streaming flags, the boats crowded with waving people, that should have welcomed disabled soldiers who had fought for their country? Lane hoped he had long passed by bitterness, but yet something rankled in the unhealed wound of his heart.

Some one put a hand in close clasp upon his arm. Then Lane heard the scrape of a crutch on the deck, and knew who stood beside him.

“Well, Dare, old boy, does it look good to you?” asked a husky voice.

“Yes, Blair, but somehow not just what I expected,” replied Lane, turning to his comrade.

Blair Maynard stood erect with the aid of a crutch. There was even a hint of pride in the poise of his uncovered head. And for once Lane saw the thin white face softening and glowing. Maynard’s big brown eyes were full of tears.

“Guess I left my nerve as well as my leg over there,” he said.

“Blair, it’s so good to get back that we’re off color,” returned Lane. “On the level, I could scream like a madman.”

“I’d like to weep,” replied the other, with a half laugh.

“Where’s Red? He oughtn’t miss this.”

“Poor devil! He sneaked off from me somewhere,” rejoined Maynard. “Red’s in pretty bad shape again. The voyage has been hard on him. I hope he’ll be well enough to get his discharge when we land. I’ll take him home to Middleville.”

“Middleville!” echoed Lane, musingly. “Home!…Blair, does it hit you–kind of queer? Do you long, yet dread to get home?”

Maynard had no reply for that query, but his look was expressive.

“I’ve not heard from Helen for over a year,” went on Lane, more as if speaking to himself.

“My God, Dare!” exclaimed his companion, with sudden fire. “Are you still thinking of her?”

“We–we are engaged,” returned Lane, slowly. “At least we were. But I’ve had no word that she—-“

“Dare, your childlike faith is due for a jar,” interrupted his comrade, with bitter scorn. “Come down to earth. You’re a crippled soldier–coming home–and damn lucky at that.”

“Blair, what do you know–that I do not know? For long I’ve suspected you’re wise to–to things at home. You know I haven’t heard much in all these long months. My mother wrote but seldom. Lorna, my kid sister, forgot me, I guess…. Helen always was a poor correspondent. Dal answered my letters, but she never told me anything about home. When we first got to France I heard often from Margie Henderson and Mel Iden–crazy kind of letters–love-sick over soldiers…. But nothing for a long time now.”

“At first they wrote! Ha! Ha!” burst out Maynard. “Sure, they wrote love-sick letters. They sent socks and cigarettes and candy and books. And they all wanted us to hurry back to marry them…. Then–when the months had gone by and the novelty had worn off–when we went against the hell of real war–sick or worn out, sleepless and miserable, crippled or half demented with terror and dread and longing for home–then, by God, they quit!”

“Oh, no, Blair–not all of them,” remonstrated Lane, unsteadily.