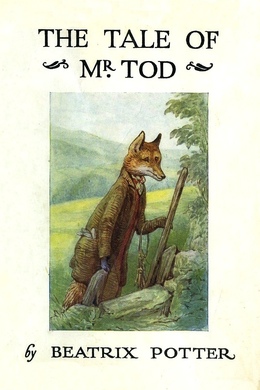 The Tale of Mr. Tod

The tale is about a badger called Tommy Brock and his neighbour Mr. Tod, a fox. Brock kidnaps the children of Benjamin Bunny and his wife Flopsy, and hides them in an oven in the home of Mr. Tod. When the fox discovers the badger asleep in his bed, the two come to fisticuffs, and Benjamin and Peter Rabbit take advantage of the moment to rescue the bunnies. The tale was influenced by the Uncle Remus stories, and was set in the fields of Potter’s Castle Farm. The tale is critically considered one of Potter’s “most complex and successful in plot and tone.”

I have made many books about well-behaved people. Now, for a change, I am going to make a story about two disagreeable people, called Tommy Brock and Mr. Tod.

Nobody could call Mr. Tod “nice.” The rabbits could not bear him; they could smell him half a mile off. He was of a wandering habit and he had foxey whiskers; they never knew where he would be next.

One day he was living in a stick-house in the coppice, causing terror to the family of old Mr. Benjamin Bouncer. Next day he moved into a pollard willow near the lake, frightening the wild ducks and the water rats.

In winter and early spring he might generally be found in an earth amongst the rocks at the top of Bull Banks, under Oatmeal Crag.

He had half a dozen houses, but he was seldom at home.

The houses were not always empty when Mr. Tod moved out; because sometimes Tommy Brock moved in; (without asking leave).

Tommy Brock was a short bristly fat waddling person with a grin; he grinned all over his face. He was not nice in his habits. He ate wasp nests and frogs and worms; and he waddled about by moonlight, digging things up.

His clothes were very dirty; and as he slept in the day-time, he always went to bed in his boots. And the bed which he went to bed in, was generally Mr. Tod’s.

Now Tommy Brock did occasionally eat rabbit-pie; but it was only very little young ones occasionally, when other food was really scarce. He was friendly with old Mr. Bouncer; they agreed in disliking the wicked otters and Mr. Tod; they often talked over that painful subject.

Old Mr. Bouncer was stricken in years. He sat in the spring sunshine outside the burrow, in a muffler; smoking a pipe of rabbit tobacco.

He lived with his son Benjamin Bunny and his daughter-in-law Flopsy, who had a young family. Old Mr. Bouncer was in charge of the family that afternoon, because Benjamin and Flopsy had gone out.

The little rabbit-babies were just old enough to open their blue eyes and kick. They lay in a fluffy bed of rabbit wool and hay, in a shallow burrow, separate from the main rabbit hole. To tell the truth–old Mr. Bouncer had forgotten them.

He sat in the sun, and conversed cordially with Tommy Brock, who was passing through the wood with a sack and a little spud which he used for digging, and some mole traps. He complained bitterly about the scarcity of pheasants’ eggs, and accused Mr. Tod of poaching them. And the otters had cleared off all the frogs while he was asleep in winter–“I have not had a good square meal for a fortnight, I am living on pig-nuts. I shall have to turn vegetarian and eat my own tail!” said Tommy Brock.

It was not much of a joke, but it tickled old Mr. Bouncer; because Tommy Brock was so fat and stumpy and grinning.

So old Mr. Bouncer laughed; and pressed Tommy Brock to come inside, to taste a slice of seed-cake and “a glass of my daughter Flopsy’s cowslip wine.” Tommy Brock squeezed himself into the rabbit hole with alacrity.

And Mr. Bouncer laughed and coughed, and shut his eyes because of the cabbage smoke….

When Flopsy and Benjamin came back–old Mr. Bouncer woke up. Tommy Brock and all the young rabbit-babies had disappeared!

Mr. Bouncer would not confess that he had admitted anybody into the rabbit hole. But the smell of badger was undeniable; and there were round heavy footmarks in the sand. He was in disgrace; Flopsy wrung her ears, and slapped him.

Benjamin Bunny set off at once after Tommy Brock.