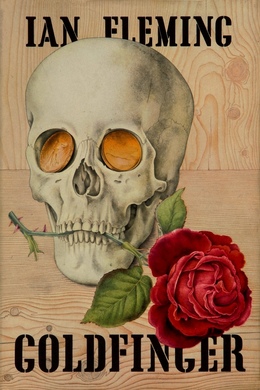 Goldfinger, the man who loved gold, said, ‘Mr Bond, it was a most evil day for you when you first crossed my path. If you had then found an oracle to consult, the oracle would have said to you, “Mr Bond, keep away from Mr Auric Goldfinger. He is a most powerful man. If Mr Goldfinger wished to crush you, he would only have to turn over in his sleep to do so.”’ With the lazy precision of Fate, this, Ian Fleming’s longest narrative of secret service adventure, brings James Bond to grips with the most powerful criminal the world has ever known–Goldfinger, the man who had planned the ‘Crime de la Crime’. Le Chiffre, Mr Big, Sir Hugo Drax, Jack Spang, Rosa Klebb, Doctor No–and now, the seventh adversary, a Goliath of crime–GOLDFINGER!

James Bond, with two double bourbons inside him, sat in the final departure lounge of Miami Airport and thought about life and death.

It was part of his profession to kill people. He had never liked doing it and when he had to kill he did it as well as he knew how and forgot about it. As a secret agent who held the rare double-O prefix–the licence to kill in the Secret Service–it was his duty to be as cool about death as a surgeon. If it happened, it happened. Regret was unprofessional–worse, it was death-watch beetle in the soul.

And yet there had been something curiously impressive about the death of the Mexican. It wasn’t that he hadn’t deserved to die. He was an evil man, a man they call in Mexico a capungo. A capungo is a bandit who will kill for as little as forty pesos, which is about twenty-five shillings–though probably he had been paid more to attempt the killing of Bond–and, from the look of him, he had been an instrument of pain and misery all his life. Yes, it had certainly been time for him to die; but when Bond had killed him, less than twenty-four hours before, life had gone out of the body so quickly, so utterly, that Bond had almost seen it come out of his mouth as it does, in the shape of a bird, in Haitian primitives.

What an extraordinary difference there was between a body full of person and a body that was empty! Now there is someone, now there is no one. This had been a Mexican with a name and an address, an employment card and perhaps a driving licence. Then something had gone out of him, out of the envelope of flesh and cheap clothes, and had left him an empty paper bag waiting for the dustcart. And the difference, the thing that had gone out of the stinking Mexican bandit, was greater than all Mexico.

Bond looked down at the weapon that had done it. The cutting edge of his right hand was red and swollen. It would soon show a bruise. Bond flexed the hand, kneading it with his left. He had been doing the same thing at intervals through the quick plane trip that had got him away. It was a painful process, but if he kept the circulation moving the hand would heal more quickly. One couldn’t tell how soon the weapon would be needed again. Cynicism gathered at the corners of Bond’s mouth.

‘National Airlines, “Airline of the Stars”, announces the departure of their flight NA 106 to La Guardia Field, New York. Will all passengers please proceed to gate number seven. All aboard, please.’

The Tannoy switched off with an echoing click. Bond glanced at his watch. At least another ten minutes before Transamerica would be called. He signalled to a waitress and ordered another double bourbon on the rocks. When the wide, chunky glass came, he swirled the liquor round for the ice to blunt it down and swallowed half of it. He stubbed out the butt of his cigarette and sat, his chin resting on his left hand, and gazed moodily across the twinkling tarmac to where the last half of the sun was slipping gloriously into the Gulf.

The death of the Mexican had been the finishing touch to a bad assignment, one of the worst–squalid, dangerous and without any redeeming feature except that it had got him away from headquarters.