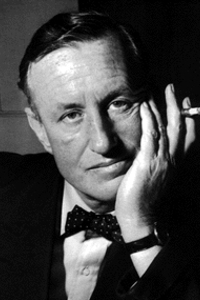 Ian Lancaster Fleming was an English author, journalist and naval intelligence officer, best known for his James Bond series of spy novels. While working for Britain’s Naval Intelligence Division during the Second World War, Fleming was involved in planning Operation Goldeneye and in the planning and oversight of two intelligence units, 30 Assault Unit and T-Force. His wartime service and his career as a journalist provided much of the background, detail and depth of the James Bond novels.

Ian Fleming, best known for his James Bond novels, wrote only one children’s book—and it is a classic! Chitty Chitty Bang Bang is the name of the flying...read more »

The final book in Iam Fleming’s fantastical children’s adventure about a flying, floating, self-driving automobile that takes the Pott family on a rioto...read more »

The Spangled Mob are no ordinary American gangsters. They prey on the addictions of the wealthy and treat the poor as collateral. Their ruthless desire ...read more »

Dr Julius No is a man with a mysterious past. Nobody knows what secrets are hidden on his Caribbean island, and all those who have attempted to investig...read more »

Sudden emergencies and beautiful girls who aren’t quite what they seem and are the stock-in-trade of James Bond. And when 007 is on the case there’s onl...read more »

SMERSH, the Soviet counterintelligence agency, plans to commit a grand act of terrorism in the intelligence field. For this, it targets British secret s...read more »

Goldfinger, the man who loved gold, said, ‘Mr Bond, it was a most evil day for you when you first crossed my path. If you had then found an oracle to c...read more »

Her hair was black and fell to her shoulders. She had high cheekbones and a sensual mouth, and wore a dress of white silk. Her eyes were blue, alight an...read more »

Another adventure from James Bond: 007. Britain’s new ICBM-based national defense system, is ready for testing, but something’s not quite right. At M’s ...read more »

A Lancia Spyder with its hood down tore past him, cut in cheekily across his bonnet and pulled away, the sexy boom of its twin exhausts echoing back at ...read more »

The Man with the Golden Gun, Paco Scaramanga, is one of the deadliest hit men in the world and the British Secret Service want him eliminated. A brainwa...read more »

Vivienne Michel is in trouble. Trying to escape her tangled past, she has run away to the American backwoods, winding up at the Dreamy Pines Motor Court...read more »

Ian Fleming’s world travels, interests, as well as his journalism and wartime experiences, lent authority to everything he wrote. In 1959, the Sunday Ti...read more »

Upon M’s insistence, James Bond takes a two-week respite in a secluded natural health spa. But amid the bland teas, tasteless yogurts, and the spine str...read more »

The Castle of Death shelters a poisoned garden, curated by a criminal mastermind and set atop a rocky Japanese island. Bond is shattered by the murder o...read more »