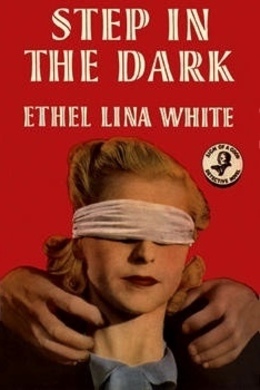 Step in the Dark

She Had Everything To Fear. Suddenly beautiful Georgia Yeo realized that she was not the guest of her fiance, Count Gustav, on his lonely Swedish island - but his prisoner! Her terror was not for herself alone. She had brought her two young children to the island. And now Count Gustav threatened their lives if Georgia refused to help him in a gigantic swindle. There was only one small chance to escape that island and Georgia had to take it. As she made her plans, she dared not betray to the Count the fear she felt. The slightest hint of it on her face would mean a death for her children - and herself!

Across the table, Georgia Yeo looked at her hostess with timid admiration.

“I wonder,” she thought, “if the time will ever come when that face will be familiar to me, at meals?”

She was acutely nervous, for she realized that the little dinner-party was a formal occasion when she was on exhibition. This was her great moment—her chance to grasp a future which blinded her with its brilliancy.

At present, she felt almost breathless by the rush of events, as though she were another Alice, whirled relentlessly through the air. It was only ten days since she had left England, for the first time in her life. Since then, much had happened—and it had happened too quickly.

She had come to Brussels and met the Count.

History was made on her first night. She chose to stay at an old-established hotel, patronised by those who preferred an atmosphere of tradition to ultramodern plumbing. Once the mansion of a wealthy family, it preserved its original grandeur of yellowed marble walls and vast gilt-framed mirrors as a background for solid nineteenth-century furniture.

It was situated in the town, amid a tangle of dark narrow streets, so that Georgia was able to gaze through the revolving doors of the lounge and watch the people passing outside. A fine rain was falling so imperceptibly that it was visible only as a sliver through the darkness. It glistened on a procession of umbrellas and the statuary of a fountain, set in the middle of the road.

Inside was the brilliancy of branching electric lights—a constant flux of visitors—a babel of voices speaking an unfamiliar language. As she sat and watched, the novelty of her surroundings thrilled her to excited expectancy. For six years she had looked out, at twilight, always upon the same scene—an empty grey waste, with a distant white line of crawling foam, marking the sea.

She opened her cigarette case, which was the signal for the Count literally to leap into her life, forestalling the waiter with a match.

“Can it be really true?” he asked a minute later. “The clerk at the Bureau tells me that you are Mrs. Yeo—the celebrated writer of so many detective thrillers?”

Faster, faster…When she admitted her identity, the Count swept her away on the current of his exuberant spirits. In his stimulating company, she saw Brussels as a whirling confusion of ancient buildings, cobbled streets, statues, still life paintings of carcasses and dark arcaded dress-shops.

Out of the swarm of impressions there emerged a few indelible impressions. The mellow glory of the gilded houses of the Grand Place seen in a red, watery sunset. The twin towers of St. Gudule’s floating in a silvery mist. The massive grandeur of the Palais de Justice, challenging the shock of Judgment Day. The soaring figure of St. Michael glittering in the morning sun. The horror of a picture in the Wiertz Museum—”The Age of Innocence”—which depicted two children burning a butterfly’s wings.

Faster, faster…The Count rushed her from place to place, with cyclonic energy. He remained volatile, impersonal and adventurous—running risks with regulations and stamping on convention up to the moment when he formally expressed his wish that she should meet his family.

The pace increased to a breathless whirl after his relatives arrived at the hotel. Mrs. Vanderpant—aunt to the Count—was the widow of a wealthy and distinguished American. She was accompanied by an impressive-looking scientist—Professor Malfoy—and a youth named “Clair”—both connections on the American side. They were installed in the most expensive suite, from whence issued the fateful invitation.

Then, with a grinding jar, everything stopped still and Georgia found herself stationary at the dinner-table.

She was on approval.

The meal was laid in the private sitting-room, which was a chill apartment with a vast expanse of waxed parquet flooring. Starched white net curtains hung at the three long windows, framing narrow slices of cobalt-blue night sky. The golden glow of candlelight was reflected in a large Regency mirror upon the wall.

Georgia could see herself in it—small and very fair, in a backless black dinner-gown. She always looked younger than her age, but to-night, in spite of her efforts at sophistication, she appeared too immature for her writing record.

She moved her head and her reflection vanished.

“I’ve gone inside,” she thought. “That mirror has swallowed so many faces—so many scenes.”

Her dislike of seeing herself in the glass dated from her childhood, when her nurse used to hold her up before a large old-fashioned mirror. One night, she dreamed that, instead of seeing her familiar nursery, she looked into a dark smoky place, where strange people with depraved faces drank and played cards.

Her father, who always explained the connection between cause and effect, pointed out that the dream was the logical result of looking at a forbidden volume of Hogarth’s engravings.