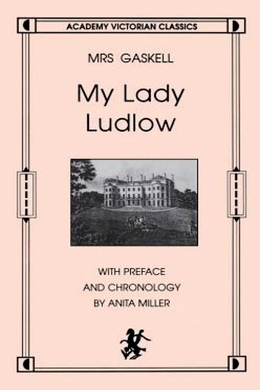 Lady Ludlow is absolute mistress of Hanbury Court and a resolute opponent of anything that might disturb the class system into which she was born. She will keep no servant who can read and write and insists that the lower orders have no rights, but only duties. But the winds of change are blowing through the village of Hanbury. The vicar, Mr. Gray, wishes to start a Sunday school for religious reasons; Mr. Horner wants to educate the citizens for economic reasons. But Lady Ludlow is not as rigid as one may think.

I am an old woman now, and things are very different to what they were in my youth. Then we, who travelled, travelled in coaches, carrying six inside, and making a two days’ journey out of what people now go over in a couple of hours with a whizz and a flash, and a screaming whistle, enough to deafen one. Then letters came in but three times a week: indeed, in some places in Scotland where I have stayed when I was a girl, the post came in but once a month;–but letters were letters then; and we made great prizes of them, and read them and studied them like books. Now the post comes rattling in twice a day, bringing short jerky notes, some without beginning or end, but just a little sharp sentence, which well- bred folks would think too abrupt to be spoken. Well, well! they may all be improvements,–I dare say they are; but you will never meet with a Lady Ludlow in these days.

I will try and tell you about her. It is no story: it has, as I said, neither beginning, middle, nor end.

My father was a poor clergyman with a large family. My mother was always said to have good blood in her veins; and when she wanted to maintain her position with the people she was thrown among,–principally rich democratic manufacturers, all for liberty and the French Revolution,–she would put on a pair of ruffles, trimmed with real old English point, very much darned to be sure,–but which could not be bought new for love or money, as the art of making it was lost years before. These ruffles showed, as she said, that her ancestors had been Somebodies, when the grandfathers of the rich folk, who now looked down upon her, had been Nobodies,–if, indeed, they had any grandfathers at all. I don’t know whether any one out of our own family ever noticed these ruffles,–but we were all taught as children to feel rather proud when my mother put them on, and to hold up our heads as became the descendants of the lady who had first possessed the lace. Not but what my dear father often told us that pride was a great sin; we were never allowed to be proud of anything but my mother’s ruffles: and she was so innocently happy when she put them on,–often, poor dear creature, to a very worn and threadbare gown,–that I still think, even after all my experience of life, they were a blessing to the family. You will think that I am wandering away from my Lady Ludlow. Not at all. The Lady who had owned the lace, Ursula Hanbury, was a common ancestress of both my mother and my Lady Ludlow. And so it fell out, that when my poor father died, and my mother was sorely pressed to know what to do with her nine children, and looked far and wide for signs of willingness to help, Lady Ludlow sent her a letter, proffering aid and assistance. I see that letter now: a large sheet of thick yellow paper, with a straight broad margin left on the left-hand side of the delicate Italian writing,–writing which contained far more in the same space of paper than all the sloping, or masculine hand-writings of the present day. It was sealed with a coat of arms,–a lozenge,–for Lady Ludlow was a widow. My mother made us notice the motto, “Foy et Loy,” and told us where to look for the quarterings of the Hanbury arms before she opened the letter. Indeed, I think she was rather afraid of what the contents might be; for, as I have said, in her anxious love for her fatherless children, she had written to many people upon whom, to tell truly, she had but little claim; and their cold, hard answers had many a time made her cry, when she thought none of us were looking. I do not even know if she had ever seen Lady Ludlow: all I knew of her was that she was a very grand lady, whose grandmother had been half-sister to my mother’s great-grandmother; but of her character and circumstances I had heard nothing, and I doubt if my mother was acquainted with them.

I looked over my mother’s shoulder to read the letter; it began, “Dear Cousin Margaret Dawson,” and I think I felt hopeful from the moment I saw those words. She went on to say,–stay, I think I can remember the very words:

‘DEAR COUSIN MARGARET DAWSON,–I have been much grieved to hear of the loss you have sustained in the death of so good a husband, and so excellent a clergyman as I have always heard that my late cousin Richard was esteemed to be.’

“There!” said my mother, laying her finger on the passage, “read that aloud to the little ones. Let them hear how their father’s good report travelled far and wide, and how well he is spoken of by one whom he never saw. COUSIN Richard, how prettily her ladyship writes! Go on, Margaret!” She wiped her eyes as she spoke: and laid her fingers on her lips, to still my little sister, Cecily, who, not understanding anything about the important letter, was beginning to talk and make a noise.