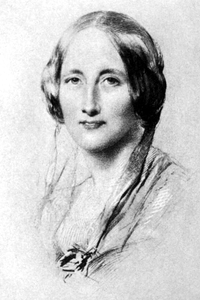 Elizabeth Cleghorn Gaskell, often referred to simply as Mrs Gaskell, was a British novelist and short story writer during the Victorian era. Her novels offer a detailed portrait of the lives of many strata of society, including the very poor, and are of interest to social historians as well as lovers of literature. Gaskell was also the first to write a biography of Charlotte Bronte, The Life of Charlotte Bronte. The best-known of Gaskell’s novels are Cranford, North and South, and Wives and Daughters. She became popular for her writing, especially her ghost stories, aided by Charles Dickens, who published her work in his magazine Household Words. Her ghost stories are in the “Gothic” vein, making them quite distinct from her “industrial” fiction. Even though her writing conforms to Victorian conventions, including the use of the name “Mrs Gaskell”, she usually framed her stories as critiques of contemporary attitudes. Her early works focused on factory work in the Midlands. She usually emphasised the role of women, with complex narratives and dynamic female characters.

A haunting, beautifully controlled novella, Cousin Phyllis is considered to be among Elizabeth Gaskell’s finest short works. Lodging with a minister on ...read more »

A portrait of the residents of an English country town in the mid nineteenth century, Cranford relates the adventures of Miss Matty and Miss Deborah, tw...read more »

Set in Manchester in the 1840s, Mary Barton depicts the effects of economic and physical hardship upon the city’s working-class community. Paralleling t...read more »

Lady Ludlow is absolute mistress of Hanbury Court and a resolute opponent of anything that might disturb the class system into which she was born. She w...read more »

When her father leaves the Church in a crisis of conscience, Margaret Hale is uprooted from her comfortable home in Hampshire to move with her family to...read more »

Ruth Hilton is an orphaned young seamstress who catches the eye of a gentleman, Henry Bellingham, who is captivated by her simplicity and beauty. When s...read more »

The tragic tale of a young woman caught between the attractions of two very different men. England is at war with France, and press gangs are seizing yo...read more »

Gaskell was a friend of Charlotte Bronte, and, having been invited to write the official life, determined both to tell the truth and to honour her frien...read more »

Set in English society before the 1832 Reform Bill, Wives and Daughters centres on the story of youthful Molly Gibson, brought up from childhood by her ...read more »