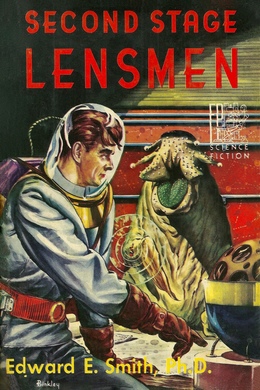 Kim Kinnison, Number One man of his time, had faced challenges before - but rarely one as daunting as this. To him fell the perilous task of infiltrating the inner circle of Boskone, stronghold of galactic civilization’s most deadly foe. Kinnison had to become a local Boskonian in every gesture, deed - and thought. He had to work his way up through the ranks of an alien enemy organization, right into the highest echelons of power. Then it would be he who issued the orders - orders that would destroy his own civilization…

“Stop, youth!” the voice of Mentor the Arisian thundered silently, deep within the Lensman’s brain.

He stopped convulsively, almost in mid-stride, and at the rigid, absent awareness in his eyes Nurse MacDougall’s face went white.

“This is not merely the loose and muddy thinking of which you have all too frequently been guilty in the past,” the deeply resonant, soundless voice went on,” it is simply not thinking at all. At times, Kinnison of Tellus, we almost despair of you. Think, youth, think! For know, Lensman, that upon the clarity of your thought and upon the trueness of your perception depends the whole future of your Patrol and of your Civilization; more so now by far than at any time in the past.”

“What’dy’mean, ‘think’?” Kinnison snapped back thoughtlessly. His mind was a seething turmoil, his emotions an indescribable blend of surprise, puzzlement, and incredulity.

For moments, as Mentor did not reply, the Gray Lensman’s mind raced. Incredulity … becoming tinged with apprehension … turning rapidly into rebellion.

“Oh, Kim!” Clarrissa choked. A queer enough tableau they made, these two, had any been there to see; the two uniformed figures standing there so strainedly, the nurse’s two hands gripping those of the Lensman. She, completely en rapport with him, had understood his every fleeting thought. “Oh, Kim! They can’t do that to us … ”

“We’ll what?” she asked, quietly. She knew what they had to face; and, strong-souled woman that she was, she was quicker to face it squarely than was he. “You were just blasting off, Kim, and so was I.”

“I suppose so,” glumly. “Why in all the nine hells of Valeria did I have to be a Lensman? Why couldn’t I have stayed a … ?”

“Because you are you,” the girl interrupted, gently. “Kimball Kinnison, the man I love. You couldn’t do anything else.” Chin up, she was fighting gamely. “And if I rate Lensman’s Mate I can’t be a sissy, either. It won’t last forever, Kim. Just a little longer to wait, that’s all.”

Eyes, steel-gray now, stared down into eyes of tawny, gold-flecked bronze. “QX, Cris? Really QX?” What a world of meaning there was in that cryptic question!

“Really, Kim.” She met his stare unfalteringly. If not entirely unafraid, at least with whole-hearted determination. “On the beam and on the green, Gray Lensman, all the way. Every long, last millimeter. There, wherever it is—to the very end of whatever road it has to be—and back again. Until it’s over. I’ll be here. Or somewhere, Kim. Waiting.”

The man shook himself and breathed deep. Hands dropped apart—both knew consciously as well as subconsciously that the less of physical demonstration the better for two such natures as theirs—and Kimball Kinnison, Unattached Lensman, came to grips with his problem.

He began really to think; to think with the full power of his prodigious mind; and as he did so he began to see what the Arisian could have—what he must have—meant. He, Kinnison, had gummed up the works. He had made a colossal blunder in the Boskonian campaign. He knew that Mentor, although silent, was still en rapport with him; and as he coldly, grimly, thought the thing through to its logical conclusion he knew, with a dull, sick certainty, what was coming next. It came:

“Ah, you perceive at last some portion of the truth. You see that your confused, superficial thinking has brought about almost irreparable harm. I grant that, in specimens so young of such a youthful race, emotion has its place and its function; but I tell you now in all solemnity that for you the time of emotional relaxation has not yet come. Think, youth—THINK!” and the ancient Arisian snapped the telepathic line.

As one, without a word, nurse and Lensman retraced their way to the room they had left so shortly before. Port Admiral Haynes and Surgeon-Marshal Lacy still sat upon the nurse’s davenport, scheming roseate schemes having to do with the wedding they had so subtly engineered.

“Back so soon? Forget something, MacDougall?” Lacy asked, amiably. Then, as both men noticed the couple’s utterly untranslatable expression:

“What happened? Break it out, Kim!” Haynes commanded.

“Plenty, chief,” Kinnison answered, quietly. “Mentor stopped us before we got to the elevator. Told me I’d put my foot in it up to my neck on that Boskonian thing. That instead of being all buttoned up, my fool blundering has put us farther back than we were when we started.”