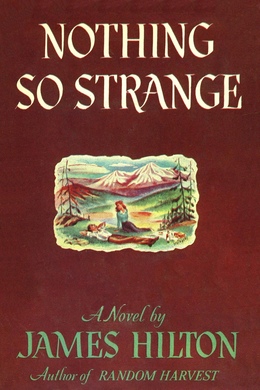 This is the story of two modern people–a young American who, both as a scientist and as a man, faced some of the biggest problems of our times; and the girl who gave him all her heart and brain. When Jane met Dr. Mark Bradley in London she was only eighteen. She and her mother were both attracted by ‘Brad,’ and the situation thus engendered proved fateful, since it led to Brad’s association with a great Viennese physicist and to his involvement in a tragic drama. But there was another drama, larger and less personal, that drew him into its widening orbit, a drama that became a secret and later an obsession. Probing yet protective, Jane’s love makes the strong thread in a pattern of deeply moving and significant events–strange events, too–and yet, to quote Daniel Webster, there is often “nothing so strange” as the truth. Although the earlier scenes of Nothing So Strange are laid abroad, its outlook is American and its climax could only have taken place in America. It is as exciting and as human as anything Mr. Hilton has ever written.

You can make things sound very simple when you are answering questions on oath and there is a girl at a side table scribbling shorthand and giving little shrugs of appeal if the words come too fast. You don’t know what the questioner is trying to get at, and you almost feel that your answers are cross-examining him; you watch for the extra flicker of interest, the sudden sharpness of the next question. And all the time, behind the facts as you truthfully state them, there’s the real truth that you remember slowly, as when you stretch in bed the morning after a long walk and explore the aches. That, of course, isn’t the kind of truth you’ve promised to tell, but it probably shows in your eyes and makes you look as if you were hiding something. Which, in a sense, you are.

“Where did you first meet him?”

“Nineteen thirty-six. I remember it because of all the Mrs. Simpson talk that was going on.” (The unsolicited detail, to account for an answer that had been perhaps too prompt.)

“What do you mean by that?”

“I mean … well … some weeks I might see him twice or three times, other weeks I wouldn’t see him at all…. I didn’t have an affair with him, if that’s what you mean.”

Shock tactics, but it failed; the man across the table referred to his notes and said quietly: “You were seventeen.”

Not that the man across the table looked like anyone to be afraid of. He had sandy hair, blue eyes, a nose that looked small because the chin and the mouth were set so squarely, a pink healthy complexion, rather pudgy hands. I would not have noticed him in the street or a crowd, but if I had had to sit in a dentist’s waiting room and stare at somebody, it might have been at him for choice. He wore a bow tie, dark blue pin-stripe suit, white shirt, and I couldn’t see what kind of shoes under the table. His name (from the letter he had written me, fixing the appointment to see him) was Henry W. Small. It didn’t particularly suit him, except that it was a good name to go unnoticed by.

“Bradley was then twenty-four,” he continued, referring again to his notes. Then he looked up. “What was he doing?”

“Studying at London University. So was I. That’s how we met.”

“Yes, a dinner party given by a professor. We were fellow guests.”

“Did you get to know him well at that party?”

“I didn’t speak to him till afterwards and then only a few words. When I met him again at the college I knew him just about enough to say hello to. Then gradually a bit more than that, but not much more. He wasn’t the kind of person you get to know well.”

“Did he have other friends?”

“Did you meet any of them?”

“Did you ever meet anyone called Sanstrom?”

“Sanstrom?…No, I don’t think I remember the name.”

“But you’re not certain?”

“Well, it’s nine years ago. I can’t remember the names of everyone who might have been at some college party.”

“You lived a rather social life?”

“More of a social life than Bradley, anyhow?”

“In other words, you knew everybody and he didn’t?”

“Oh no. He knew them, but they were more acquaintances than friends. He wasn’t easy to be friendly with.”

“Would you call him _un_friendly then?”

“So that you became his only real friend?”

“No, I wouldn’t say that either…. The fact was, he worked so hard he hadn’t much time for personal contacts of any kind.”

“Where was he living?”

“Did you ever visit him there?”

“Once–but only for a few minutes.”

“Would you say–from that one visit–that his style of life fitted with the job he had?”

“Oh sure. He didn’t earn much money and everything about him looked like it.”

“Where were you living then?”

“With my parents. They had a house in Hampstead. They usually went over for the summer.”

“Were Bradley’s rooms also in Hampstead?”

“No. In Belsize Park. Or Chalk Farm. Just a few miles away.”

“What do you mean–Belsize Park or Chalk Farm? Don’t you know which?”

“Belsize Park if you wanted a good address, Chalk Farm if you didn’t care. He didn’t care.”

He looked puzzled, but he made a note of Belsize Park or Chalk Farm. “Now on these occasions when you met him, Miss Waring, what did you usually talk about?”