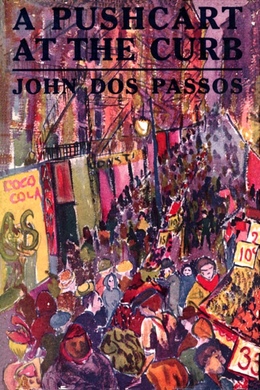 A Pushcart at the Curb

Passos’ only collection of poetry, many of these poems were published in periodicals in 1921/22, though some were composed as early as 1916. George H. Doran published A Pushcart at the Curb on October 11, 1922. There was no subsequent edition.

A long grey street with balconies. Above the gingercolored grocer’s shop trail pink geraniums and further up a striped mattress hangs from a window and the little wooden cage of a goldfinch.

Four blind men wabble down the street with careful steps on the rounded cobbles scraping with violin and flute the interment of a tune.

People gather: women with market-baskets stuffed with green vegetables, men with blankets on their shoulders and brown sunwrinkled faces.

Pipe the flutes, squeak the violins; four blind men in a row at the interment of a tune … But on the plate coppers clink round brown pennies a merry music at the funeral, penny swigs of wine penny gulps of gin peanuts and hot roast potatoes red disks of sausage tripe steaming in the corner shop …

And overhead the sympathetic finch chirps and trills approval.

A boy with rolled up shirtsleeves turns the handle. Grind, grind. The black sphere whirls above a charcoal fire. Grind, grind. The boy sweats and grits his teeth and turns while a man blows up the coals. Grind, grind. Thicker comes the blue curling smoke, the moka-scented smoke heavy with early morning and the awakening city with click-clack click-clack on the cobblestones and the young winter sunshine advancing inquisitively across the black and white tiles of my bedroom floor. Grind, grind. The coffee is done. The boy rubs his arms and yawns, and the sphere and the furnace are trundled away to be set up at another café.

A poor devil whose dirty ashen white body shows through his rags sniffs sensually with dilated nostrils the heavy coffee-fragrant smoke, and turns to sleep again in the feeble sunlight of the greystone steps.

Women are selling tuberoses in the square, and sombre-tinted wreaths stiffly twined and crinkly for this is the day of the dead.

Women are selling tuberoses in the square. Their velvet odor fills the street somehow stills the tramp of feet; for this is the day of the dead.

Their presence is heavy about us like the velvet black scent of the flowers: incense of pompous interments, patter of monastic feet, drone of masses drowsily said for the thronging dead.

Women are selling tuberoses in the square to cover the tombs of the envious dead and shroud them again in the lethean scent lest the dead should remember.

Above the scuffling footsteps of crowds the clang of trams the shouts of newsboys the stridence of wheels, very calm, floats the sudden trill of a pipe three silvery upward notes wistfully quavering, notes a Thessalian shepherd might have blown to call his sheep in the emerald shade of Tempe, notes that might have waked the mad women sleeping among pinecones in the hills and stung them to headlong joy of the presence of their mad Iacchos, notes like the glint of sun making jaunty the dark waves of Tempe.

In the street an old man is passing wrapped in a dun brown mantle blowing with bearded lips on a shining panpipe while he trundles before him a grindstone.

Rain slants on an empty square.

Across the expanse of cobbles rides an old shawl-muffled woman black on a donkey with pert ears that places carefully his tiny sharp hoofs as if the cobbles were eggs. The paniers are full of bright green lettuces and purple cabbages, and shining red bellshaped peppers, dripping, shining, a band in marchtime, in the grey rain, in the grey city.