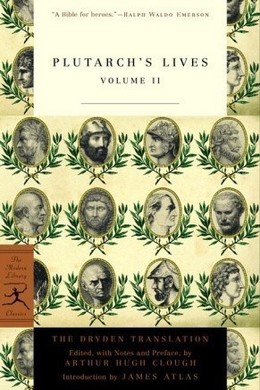 Lives is a series of biographies of famous Greeks and Romans by the ancient Greek historian Plutarch who lived during the first and second century AD. Consisting of twenty-three paired biographies, one Greek and one Roman, and four unpaired, which explore the influence of character on the lives and destinies of the subjects. Rather than providing strictly historical accounts, Plutarch was most concerned with capturing this issue of character. This volume contains the second part of this classic history in which you will find the biographies of the following persons: Pelopidas, Marcellus, Aristeides, Marcus Cato, Philopoemen, Titus Flamininus, Pyrrhus, Caius Marius, Lysander, Sulla, Kimon and Lucullus.

I. Cato the elder, speaking to some persons who were praising a man of reckless daring and audacity in war, observed that there is a difference between a man’s setting a high value on courage, and setting a low value on his own life–and rightly. For a daring soldier in the army of Antigonus, but of broken and ill health, being asked by the king the reason of his paleness, confessed that he was suffering from some secret disorder. When then the king, anxious for him, charged his physicians to use the greatest care in their treatment, if a cure were possible, at length this brave fellow, being restored to health, was no longer fond of peril and furious in battle, so that Antigonus reproved him, and expressed surprise at the change. The man made no secret of his reason, but answered: “My, king, you have made me less warlike by freeing me from those miseries on account of which I used to hold my life cheap.” And the Sybarite seems to have spoken to the same effect about the Spartans, when he said that “they do no great thing by dying in the wars in order to escape from such labours and such a mode of life as theirs.” However, no wonder if the Sybarites, effete with luxurious debauchery, thought men mad who despised death for love of honour and noble emulation; whereas the Lacedæmonians were enabled by their valour both to live and to die with pleasure, as the elegy shows, which runs thus:

“‘Twas not that life or death itself was good, That these heroic spirits shed their blood: This was their aim, and this their latest cry, ‘Let us preserve our honour, live or die.’”

For neither is avoidance of death blameable, if a man does not cling to his life from dishonourable motives; nor is exposure to peril honourable, if it springs from carelessness of life. For this reason Homer always brings the most daring and warlike heroes into battle well and beautifully armed, and the Greek lawgivers punish the man who throws away his shield, but not him who throws away his sword or spear, showing that it is each man’s duty to take more care that he does not receive hurt himself, than to hurt the enemy, especially if he be the chief of an army or city.

II. For if, as Iphikrates defined it, the light troops resemble the hands, the cavalry the feet, the main body the breast and trunk, and the general the head, then it would appear that he, if he runs into danger and shows personal daring, risks not only his own life, but that of all those whose safety depends upon him; and vice versâ. Wherefore Kallikratidas, although otherwise a great man, yet did not make a good answer to the soothsayer; for when he begged him to beware of death, which was presaged by the sacrifices, he replied that Sparta had more men besides himself. No doubt, in fighting either by sea or land Kallikratidas only counted for one, but as a general, he combined in his own person the strength of all the rest, so that he by whose death so many perished, was indeed more than one. A better answer was that of old Antigonus, who, as he was about to begin a sea-fight off Andros, some one having said that the enemy’s fleet was the more numerous, asked, “And for how many do you count me?”–setting a high value, as is due, upon a skilful and brave leader, whose first duty is to keep safe him who preserves all the rest.

So Timotheus said well, when Chares was displaying to the Athenians the wounds on his body, and his shield pierced by a dart. “Now I,” said he, “when I was besieging Samos, was quite ashamed if an arrow fell near me, thinking that I was exposing myself more boyishly than was fitting for the general and leader of so important a force.” In cases where the personal risk of the general is of great moment to his army, then he must fight and expose himself without stint, and disregard those who say that a general should die of old age, or at any rate, when an old man. But where the gain is small in case of success, while failure ruins everything, no one demands that the work of the common soldier be performed at the risk of the general’s life.

These prefatory remarks occurred to me in writing the Lives of Pelopidas and Marcellus, great men who fell in a manner scarce worthy of themselves: for being both of them most stout in battle, and having each illustrated his country by splendid campaigns, against, too, the most terrible antagonists–the one, as we read, having routed Hannibal, who before was invincible, and the other having in a pitched battle conquered the Lacedæmonians, the ruling state by sea and land–yet they without any consideration endangered themselves and flung away their lives just at the time when there was special need for such men to live and command. And on this account I have drawn a parallel between their lives, tracing out the points of resemblance between them.