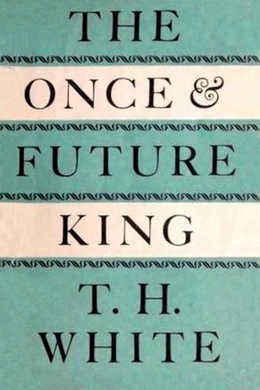 The Once and Future King

White’s masterful retelling of the saga of King Arthur is a fantasy classic as legendary as Excalibur and Camelot, and a poignant story of adventure, romance, and magic that has enchanted readers for generations. Once upon a time, a young boy called Wart was tutored by a magician named Merlyn in preparation for a future he couldn’t possibly imagine. A future in which he would ally himself with the greatest knights, love a legendary queen and unite a country dedicated to chivalrous values. A future that would see him crowned and known for all time as Arthur, King of the Britons. During Arthur’s reign, the kingdom of Camelot was founded to cast enlightenment on the Dark Ages, while the knights of the Round Table embarked on many a noble quest. But Merlyn foresaw the treachery that awaited his liege: the forbidden love between Queen Guinevere and Lancelot, the wicked plots of Arthur’s half-sister Morgause, and the hatred she fostered in Mordred that would bring an end to the king’s dreams for Britain–and to the king himself.

This volume contains all four King Arthur books: The Sword in the Stone, The Witch in the Wood, The Ill-Made Knight, and Candle in the Wind.

On Mondays, Wednesdays and Fridays it was Court Hand and Summulae Logicales, while the rest of the week it was the Organon, Repetition and Astrology. The governess was always getting muddled with her astrolabe, and when she got specially muddled she would take it out of the Wart by rapping his knuckles. She did not rap Kay’s knuckles, because when Kay grew older he would be Sir Kay, the master of the estate. The Wart was called the Wart because it more or less rhymed with Art, which was short for his real name. Kay had given him the nickname. Kay was not called anything but Kay, as he was too dignified to have a nickname and would have flown into a passion if anybody had tried to give him one. The governess had red hair and some mysterious wound from which she derived a lot of prestige by showing it to all the women of the castle, behind closed doors. It was believed to be where she sat down, and to have been caused by sitting on some armour at a picnic by mistake. Eventually she offered to show it to Sir Ector, who was Kay’s father, had hysterics and was sent away. They found out afterwards that she had been in a lunatic hospital for three years.

In the afternoons the programme was: Mondays and Fridays, tilting and horsemanship; Tuesdays, hawking; Wednesdays, fencing; Thursdays, archery; Saturdays, the theory of chivalry, with the proper measures to be blown on all occasions, terminology of the chase and hunting etiquette. If you did the wrong thing at the mort or the undoing, for instance, you were bent over the body of the dead beast and smacked with the flat side of a sword. This was called being bladed. It was horseplay, a sort of joke like being shaved when crossing the line. Kay was not bladed, although he often went wrong.

When they had got rid of the governess, Sir Ector said, “After all, damn it all, we can’t have the boys runnin’ about all day like hooligans–after all, damn it all? Ought to be havin’ a first-rate eddication, at their age. When I was their age I was doin’ all this Latin and stuff at five o’clock every mornin’. Happiest time of me life. Pass the port.”

Sir Grummore Grummursum, who was staying the night because he had been benighted out questin’ after a specially long run, said that when he was their age he was swished every mornin’ because he would go hawkin’ instead of learnin’. He attributed to this weakness the fact that he could never get beyond the Future Simple of Utor. It was a third of the way down the left-hand leaf, he said. He thought it was leaf ninety-seven. He passed the port.

Sir Grummore said, “Oh, not so bad. Rattlin’ good day, in fact. Found a chap called Sir Bruce Saunce Pité choppin’ off a maiden’s head in Weedon Bushes, ran him to Mixbury Plantation in the Bicester, where he doubled back, and lost him in Wicken Wood. Must have been a good twenty-five miles as he ran.”

“But about these boys and all this Latin and that,” added the old gentleman. “Amo, amas, you know, and runnin’ about like hooligans: what would you advise?”

“Ah,” said Sir Grummore, laying his finger by his nose and winking at the bottle, “that takes a deal of thinkin’ about, if you don’t mind my sayin’ so.”

“Don’t mind at all,” said Sir Ector. “Very kind of you to say anythin’. Much obliged, I’m sure. Help yourself to port.”

“Get it from a friend of mine.”

“But about these boys,” said Sir Grummore. “How many of them are there, do you know?”

“Couldn’t send them to Eton, I suppose?” inquired Sir Grummore cautiously. “Long way and all that, we know.”

It was not really Eton that he mentioned, for the College of Blessed Mary was not founded until 1440, but it was a place of the same sort. Also they were drinking Metheglyn, not Port, but by mentioning the modern wine it is easier to give you the feel.

“Isn’t so much the distance,” said Sir Ector, “but that giant What’s-‘is-name is in the way. Have to pass through his country, you understand.”

“Can’t recollect it at the moment, not for the life of me. Fellow that lives by the Burbly Water.”

“The only other thing,” said Sir Grummore, “is to have a tutor.”

“You mean a fellow who teaches you.”

“That’s it,” said Sir Grummore. “A tutor, you know, a fellow who teaches you.”

“Have some more port,” said Sir Ector. “You need it after all this questin’.”

“Splendid day,” said Sir Grummore. “Only they never seem to kill nowadays. Run twenty-five miles and then mark to ground or lose him altogether. The worst is when you start a fresh quest.”