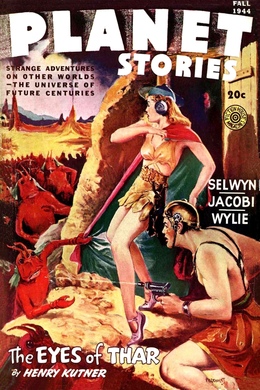 The Eyes Of Thar

She spoke in a tongue dead a thousand years, and she had no memory for the man she faced. Yet he had held her tightly but a few short years before, had sworn eternal vengeance—when she died in his arms from an assassin’s wounds.

He had come back, though he knew what to expect. He had always come back to Klanvahr, since he had been hunted out of that ancient Martian fortress so many years ago. Not often, and always warily, for there was a price on Dantan’s head, and those who governed the Dry Provinces would have been glad to pay it. Now there was an excellent chance that they might pay, and soon, he thought, as he walked doggedly through the baking stillness of the night, his ears attuned to any dangerous sound in the thin, dry air.

Even after dark it was hot here. The dead ground, parched and arid, retained the heat, releasing it slowly as the double moons—the Eyes of Thar, in Klanvahr mythology—swung across the blazing immensity of the sky. Yet Samuel Dantan came back to this desolate land as he had come before, drawn by love and by hatred.

The love was lost forever, but the hate could still be satiated. He had not yet glutted his blood-thirst. When Dantan came back to Klanvahr, men died, though if all the men of the Redhelm Tribe were slain, even that could not satisfy the dull ache in Dantan’s heart.

Now they were hunting him.

The girl—he had not thought of her for years; he did not want to remember. He had been young when it happened. Of Earth stock, he had during a great Martian drought become godson to an old shaman of Klanvahr, one of the priests who still hoarded scraps of the forgotten knowledge of the past, glorious days of Martian destiny, when bright towers had fingered up triumphantly toward the Eyes of Thar.

Memories…the solemn, antique dignity of the Undercities, in ruins now…the wrinkled shaman, intoning his rituals…very old books, and older stories…raids by the Redhelm Tribe…and a girl Samuel Dantan had known. There was a raid, and the girl had died. Such things had happened many times before; they would happen again. But to Dantan this one death mattered very much.

Afterward, Dantan killed, first in red fury, then with a cool, quiet, passionless satisfaction. And, since the Redhelms were well represented in the corrupt Martian government, he had become outlaw.

The girl would not have known him now. He had gone out into the spaceways, and the years had changed him. He was still thin, his eyes still dark and opaque as shadowed tarn-water, but he was dry and sinewy and hard, moving with the trained, dangerous swiftness of the predator he was—and, as to morals, Dantan had none worth mentioning. He had broken more than ten commandments. Between the planets, and in the far-flung worlds bordering the outer dark, there are more than ten. But Dantan had smashed them all.

In the end there was still the dull, sickening hopelessness, part loneliness, part something less definable. Hunted, he came back to Klanvahr, and when he came, men of the Redhelms died. They did not die easily.

But this time it was they who hunted, not he. They had cut him off from the air-car and they followed now like hounds upon his track. He had almost been disarmed in that last battle. And the Redhelms would not lose the trail; they had followed sign for generations across the dying tundras of Mars.

He paused, flattening himself against an outcrop of rock, and looked back. It was dark; the Eyes of Thar had not yet risen, and the blaze of starlight cast a ghastly, leprous shine over the chaotic slope behind him, great riven boulders and jutting monoliths, canyon-like, running jagged toward the horizon, a scene of cosmic ruin that every old and shrinking world must show. He could see nothing of his pursuers, but they were coming. They were still far behind. But that did not matter; he must circle—circle—

And first, he must regain a little strength. There was no water in his canteen. His throat was dust-dry, and his tongue felt swollen and leathery. Moving his shoulders uneasily, his dark face impassive, Dantan found a pebble and put it in his mouth, though he knew that would not help much. He had not tasted water for—how long? Too long, anyhow.

But nothing stirred. Only a whisper of the dry, hot wind murmuring up from the distance, sighing and soughing like muted harps. Ghosts of the past riding the night, Dantan thought. How did those ghosts see Klanvahr? Not as this desolate wasteland, perhaps. They saw it with the eyes of memory, as the Mother of Empires which Klanvahr had once been, so long ago that only the tales persisted, garbled and unbelievable.