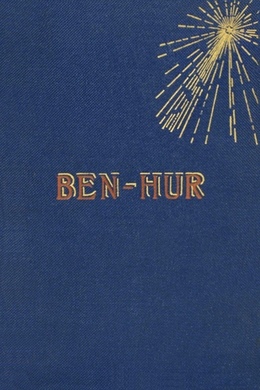 A Tale of the Christ

Judah Ben-Hur lives as a rich Jewish prince and merchant in Jerusalem at the beginning of the 1st century. His old friend Messala arrives as commanding officer of the Roman legions. They become bitter enemies. Because of an unfortunate accident, Ben-Hur is sent to slave in the mines while his family is sent to leprosy caves. As Messala is dying from being crushed in a chariot race, he reveals where Ben-Hur’s family is. On the road to find them, Ben-Hur meets the Christ as he is on the road to Golgotha to be crucified. That day changes Ben-Hur’s life forever, for that is the day he becomes a believer.

The Jebel es Zubleh is a mountain fifty miles and more in length, and so narrow that its tracery on the map gives it a likeness to a caterpillar crawling from the south to the north. Standing on its red-and-white cliffs, and looking off under the path of the rising sun, one sees only the Desert of Arabia, where the east winds, so hateful to vinegrowers of Jericho, have kept their playgrounds since the beginning. Its feet are well covered by sands tossed from the Euphrates, there to lie, for the mountain is a wall to the pasture-lands of Moab and Ammon on the west–lands which else had been of the desert a part.

The Arab has impressed his language upon everything south and east of Judea, so, in his tongue, the old Jebel is the parent of numberless wadies which, intersecting the Roman road–now a dim suggestion of what once it was, a dusty path for Syrian pilgrims to and from Mecca–run their furrows, deepening as they go, to pass the torrents of the rainy season into the Jordan, or their last receptacle, the Dead Sea. Out of one of these wadies–or, more particularly, out of that one which rises at the extreme end of the Jebel, and, extending east of north, becomes at length the bed of the Jabbok River–a traveller passed, going to the table-lands of the desert. To this person the attention of the reader is first besought.

Judged by his appearance, he was quite forty-five years old. His beard, once of the deepest black, flowing broadly over his breast, was streaked with white. His face was brown as a parched coffee-berry, and so hidden by a red kufiyeh (as the kerchief of the head is at this day called by the children of the desert) as to be but in part visible. Now and then he raised his eyes, and they were large and dark. He was clad in the flowing garments so universal in the East; but their style may not be described more particularly, for he sat under a miniature tent, and rode a great white dromedary.

It may be doubted if the people of the West ever overcome the impression made upon them by the first view of a camel equipped and loaded for the desert. Custom, so fatal to other novelties, affects this feeling but little. At the end of long journeys with caravans, after years of residence with the Bedawin, the Western-born, wherever they may be, will stop and wait the passing of the stately brute. The charm is not in the figure, which not even love can make beautiful; nor in the movement, the noiseless stepping, or the broad careen. As is the kindness of the sea to a ship, so that of the desert to its creature. It clothes him with all its mysteries; in such manner, too, that while we are looking at him we are thinking of them: therein is the wonder. The animal which now came out of the wady might well have claimed the customary homage. Its color and height; its breadth of foot; its bulk of body, not fat, but overlaid with muscle; its long, slender neck, of swanlike curvature; the head, wide between the eyes, and tapering to a muzzle which a lady’s bracelet might have almost clasped; its motion, step long and elastic, tread sure and soundless–all certified its Syrian blood, old as the days of Cyrus, and absolutely priceless. There was the usual bridle, covering the forehead with scarlet fringe, and garnishing the throat with pendent brazen chains, each ending with a tinkling silver bell; but to the bridle there was neither rein for the rider nor strap for a driver. The furniture perched on the back was an invention which with any other people than of the East would have made the inventor renowned. It consisted of two wooden boxes, scarce four feet in length, balanced so that one hung at each side; the inner space, softly lined and carpeted, was arranged to allow the master to sit or lie half reclined; over it all was stretched a green awning. Broad back and breast straps, and girths, secured with countless knots and ties, held the device in place. In such manner the ingenious sons of Cush had contrived to make comfortable the sunburnt ways of the wilderness, along which lay their duty as often as their pleasure.

When the dromedary lifted itself out of the last break of the wady, the traveller had passed the boundary of El Belka, the ancient Ammon. It was morning-time. Before him was the sun, half curtained in fleecy mist; before him also spread the desert; not the realm of drifting sands, which was farther on, but the region where the herbage began to dwarf; where the surface is strewn with boulders of granite, and gray and brown stones, interspersed with languishing acacias and tufts of camel-grass. The oak, bramble, and arbutus lay behind, as if they had come to a line, looked over into the well-less waste and crouched with fear.