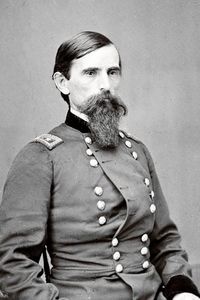 Lewis “Lew” Wallace was an American lawyer, Union general in the American Civil War, territorial governor and statesman, politician, and author. Wallace served as governor of the New Mexico Territory at the time of the Lincoln County War and worked to bring an end to the fighting. Of his novels and biographies, he is best known for his historical novel Ben-Hur: A Tale of the Christ (1880), a bestselling book since its publication, and called “the most influential Christian book of the nineteenth century.” It has been adapted four times for films. (source: Wikipedia)

Judah Ben-Hur lives as a rich Jewish prince and merchant in Jerusalem at the beginning of the 1st century. His old friend Messala arrives as commanding ...read more »

Volume one of Wallace’s, The Prince of India; recounting the events leading to the fall of Constantinople to the Turks in 1453. The legendary wandering ...read more »

The final volume of Wallace’s, The Prince of India. The protagonist of this novel is “The Wandering Shoemaker” a figure from medieval Christian folklore...read more »