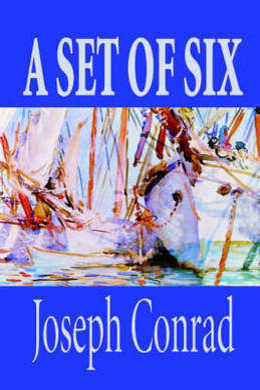 A Set of Six

Certain individualities grow into fame through their vices and their virtues, or simply by their actions, which may have a temporary importance; and then they become forgotten. The names of a few leaders alone survive the end of armed strife and are further pre- served in history; so that, vanishing from men’s active memories, they still exist in books.

A revolutionary war raises many strange characters out of the obscurity which is the common lot of humble lives in an undisturbed state of society.

Certain individualities grow into fame through their vices and their virtues, or simply by their actions, which may have a temporary importance; and then they become forgotten. The names of a few leaders alone survive the end of armed strife and are further preserved in history; so that, vanishing from men’s active memories, they still exist in books.

The name of General Santierra attained that cold paper–and–ink immortality. He was a South American of good family, and the books published in his lifetime numbered him amongst the liberators of that continent from the oppressive rule of Spain.

That long contest, waged for independence on one side and for dominion on the other, developed in the course of years and the vicissitudes of changing fortune the fierceness and inhumanity of a struggle for life. All feelings of pity and compassion disappeared in the growth of political hatred. And, as is usual in war, the mass of the people, who had the least to gain by the issue, suffered most in their obscure persons and their humble fortunes.

General Santierra began his service as lieutenant in the patriot army raised and commanded by the famous San Martin, afterwards conqueror of Lima and liberator of Peru. A great battle had just been fought on the banks of the river Bio–Bio. Amongst the prisoners made upon the routed Royalist troops there was a soldier called Gaspar Ruiz. His powerful build and his big head rendered him remarkable amongst his fellow–captives. The personality of the man was unmistakable. Some months before he had been missed from the ranks of Republican troops after one of the many skirmishes which preceded the great battle. And now, having been captured arms in hand amongst Royalists, he could expect no other fate but to be shot as a deserter.

Gaspar Ruiz, however, was not a deserter; his mind was hardly active enough to take a discriminating view of the advantages or perils of treachery. Why should he change sides? He had really been made a prisoner, had suffered ill–usage and many privations. Neither side showed tenderness to its adversaries. There came a day when he was ordered, together with some other captured rebels, to march in the front rank of the Royal troops. A musket had been thrust into his hands. He had taken it. He had marched. He did not want to be killed with circumstances of peculiar atrocity for refusing to march. He did not understand heroism but it was his intention to throw his musket away at the first opportunity. Meantime he had gone on loading and firing, from fear of having his brains blown out at the first sign of unwillingness, by some non–commissioned officer of the King of Spain. He tried to set forth these elementary considerations before the sergeant of the guard set over him and some twenty other such deserters, who had been condemned summarily to be shot.

It was in the quadrangle of the fort at the back of the batteries which command the roadstead of Valparaiso. The officer who had identified him had gone on without listening to his protestations. His doom was sealed; his hands were tied very tightly together behind his back; his body was sore all over from the many blows with sticks and butts of muskets which had hurried him along on the painful road from the place of his capture to the gate of the fort. This was the only kind of systematic attention the prisoners had received from their escort during a four days’ journey across a scantily watered tract of country. At the crossings of rare streams they were permitted to quench their thirst by lapping hurriedly like dogs. In the evening a few scraps of meat were thrown amongst them as they dropped down dead–beat upon the stony ground of the halting–place.

As he stood in the courtyard of the castle in the early morning, after having been driven hard all night, Gaspar Ruiz’s throat was parched, and his tongue felt very large and dry in his mouth.

And Gaspar Ruiz, besides being very thirsty, was stirred by a feeling of sluggish anger, which he could not very well express, as though the vigour of his spirit were by no means equal to the strength of his body.

The other prisoners in the batch of the condemned hung their heads, looking obstinately on the ground. But Gaspar Ruiz kept on repeating: “What should I desert for to the Royalists? Why should I desert? Tell me, Estaban!”

He addressed himself to the sergeant, who happened to belong to the same part of the country as himself. But the sergeant, after shrugging his meagre shoulders once, paid no further attention to the deep murmuring voice at his back. It was indeed strange that Gaspar Ruiz should desert.