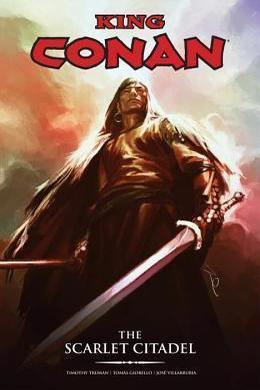 Trapped in the dungeons beneath an evil wizard’s scarlet stronghold, Conan must confront a slew of new challenges and foes as he fights to free himself and reclaim the throne of Aquilonia! Featuring duplicitous betrayers, sparring sorcerers, and all of the brutal excitement you’ve come to expect from the rampaging Cimmerian. One of the original short stories starring the fictional sword and sorcery hero Conan the Cimmerian, written by American author Robert E. Howard.

The roar of battle had died away; the shout of victory mingled with the cries of the dying. Like gay-hued leaves after an autumn storm, the fallen littered the plain; the sinking sun shimmered on burnished helmets, gilt-worked mail, silver breastplates, broken swords and the heavy regal folds of silken standards, overthrown in pools of curdling crimson. In silent heaps lay war-horses and their steel-clad riders, flowing manes and blowing plumes stained alike in the red tide. About them and among them, like the drift of a storm, were strewn slashed and trampled bodies in steel caps and leather jerkins–archers and pikemen.

The oliphants sounded a fanfare of triumph all over the plain, and the hoofs of the victors crunched in the breasts of the vanquished as all the straggling, shining lines converged inward like the spokes of a glittering wheel, to the spot where the last survivor still waged unequal strife.

That day Conan, king of Aquilonia, had seen the pick of his chivalry cut to pieces, smashed and hammered to bits, and swept into eternity. With five thousand knights he had crossed the south-eastern border of Aquilonia and ridden into the grassy meadowlands of Ophir, to find his former ally, King Amalrus of Ophir, drawn up against him with the hosts of Strabonus, king of Koth. Too late he had seen the trap. All that a man might do he had done with his five thousand cavalrymen against the thirty thousand knights, archers and spearmen of the conspirators.

Without bowmen or infantry, he had hurled his armored horsemen against the oncoming host, had seen the knights of his foes in their shining mail go down before his lances, had torn the opposing center to bits, driving the riven ranks headlong before him, only to find himself caught in a vise as the untouched wings closed in. Strabonus’ Shemitish bowmen had wrought havoc among his knights, feathering them with shafts that found every crevice in their armor, shooting down the horses, the Kothian pikemen rushing in to spear the fallen riders. The mailed lancers of the routed center had re-formed, reinforced by the riders from the wings, and had charged again and again, sweeping the field by sheer weight of numbers.

The Aquilonians had not fled; they had died on the field, and of the five thousand knights who had followed Conan southward, not one left the field alive. And now the king himself stood at bay among the slashed bodies of his house troops, his back against a heap of dead horses and men. Ophirean knights in gilded mail leaped their horses over mounds of corpses to slash at the solitary figure; squat Shemites with blue-black beards, and dark-faced Kothian knights ringed him on foot. The clangor of steel rose deafeningly; the black-mailed figure of the western king loomed among his swarming foes, dealing blows like a butcher wielding a great cleaver. Riderless horses raced down the field; about his iron-clad feet grew a ring of mangled corpses. His attackers drew back from his desperate savagery, panting and livid.

Now through the yelling, cursing lines rode the lords of the conquerors.Strabonus, with his broad dark face and crafty eyes; Amalrus, slender, fastidious, treacherous, dangerous as a cobra; and the lean vulture Tsotha-lanti, clad only in silken robes, his great black eyes glittering from a face that was like that of a bird of prey. Of this Kothian wizard dark tales were told; tousle-headed women in northern and western villages frightened children with his name, and rebellious slaves were brought to abased submission quicker than by the lash, with threat of being sold to him. Men said that he had a whole library of dark works bound in skin flayed from living human victims, and that in nameless pits below the hill whereon his palace sat, he trafficked with the powers of darkness, trading screaming girl slaves for unholy secrets. He was the real ruler of Koth.

Now he grinned bleakly as the kings reined back a safe distance from the grim iron-clad figure looming among the dead. Before the savage blue eyes blazing murderously from beneath the crested, dented helmet, the boldest shrank. Conan’s dark scarred face was darker yet with passion; his black armor was hacked to tatters and splashed with blood; his great sword red to the crosspiece. In this stress all the veneer of civilization had faded; it was a barbarian who faced his conquerors. Conan was a Cimmerian by birth, one of those fierce moody hillmen who dwelt in their gloomy, cloudy land in the north. His saga, which had led him to the throne of Aquilonia, was the basis of a whole cycle of hero tales.

So now the kings kept their distance, and Strabonus called on his Shemitish archers to loose their arrows at his foe from a distance; his captains had fallen like ripe grain before the Cimmerian’s broadsword, and Strabonus, penurious of his knights as of his coins, was frothing with fury. But Tsotha shook his head.