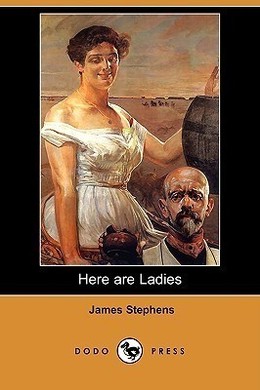 Stephens’s first collection of short stories revolves about the often nameless clerks, typists, and office supervisors of middle-class Dublin. The 19 stories include ‘Women,’ ‘Three Heavy Husbands,’ ‘A Glass of Beer,’ ‘One and One,’ ‘Three Women Who Wept,’ ‘The Triangle,’ The Daisies,’ ‘Three Angry People,’ ‘The Threepenny Piece,’ and ‘Brigid.’

He had a high nose. He looked at one over the collar, so to speak. His regard was very assured, and his speech was that short bundle of monosyllables which the subaltern throws at the orderly. He had never been questioned, and, the precedent being absent, he had never questioned himself. Why should he? We live by question and answer, but we do not know the reply to anything until a puzzled comrade bothers us and initiates that divine curiosity which both humbles and uplifts us.

He wanted all things for himself. What he owned he wished to own completely. He would give anything away with the largest generosity, but he would share with no one–

“Whatever is mine,” said he, “must be entirely mine. If it is alive I claim its duty to the last respiration of its breath, and if it is dead I cannot permit a mortgage on it. Have you a claim on anything belonging to me? then you may have it entirely, I must have all of it or none.”

He was a stockbroker, and, by the methods peculiar to that mysterious profession, he had captured a sufficiency of money to enable him to regard the future with calmness and his fellow-creatures with condescension–perhaps the happiest state to which a certain humanity can attain.

So far matters were in order. There remained nothing to round his life into the complete, harmonious circle except a wife; but as a stated income has the choice of a large supply, he shortly discovered a lady whose qualifications were such as would ornament any, however exalted, position–She was sound in wind and limb. She spoke grammar with the utmost precision, and she could play the piano with such skill that it was difficult to explain why she played it badly.

This also was satisfactory, and if the world had been made of machinery he would have had the fee-simple of happiness. But to both happiness and misery there follows the inevitable second act, and beyond that, and to infinity, action and interaction, involution and evolution, forging change for ever. Thus he failed to take into consideration that the lady was alive, that she had a head on her shoulders which was native to her body, and that she could not be aggregated as chattel property for any longer period than she agreed to.

After their marriage he discovered that she had dislikes which did not always coincide with his, and appreciations which set his teeth on edge. A wife in the house is a critic on the hearth–this truth was daily and unpleasantly impressed upon him: but, of course, every man knows that every woman is a fool, and a tolerant smile is the only recognition we allow to their whims. God made them as they are–we grin, and bear it.

His wife found that the gospel of her husband was this–Love me to the exclusion of all human creatures. Believe in me even when I am in the wrong. Women should be seen and not heard. When you want excitement make a fuss of your husband.–But while he entirely forgot that his wife had been bought and paid for, she did not forget it: indeed, she could not help remembering it. A wrong had been done her not to be obscured even by economics, the great obscurer. She had been won and not wooed. (The very beasts have their privileges!) She had been defrauded of how many teasing and provoking prerogatives, aloofnesses, and surrenders, and her body, if not her mind, resented and remembered it.

There are times when calmness is not recognised as a virtue. Of course, he had wooed her in a way. He took her to the opera, he gave her jewels, he went to Church with her twice every Sunday, and once a month he knelt beside her in more profound reverences: sometimes he petted her, always he was polite–

But he had not told her that her eyes were the most wonderful and inspiring orbs into which a tired man could look. He never said that there would not be much to choose between good and evil if he lost her. He never said that one touch of her lips would electrify a paralytic into an acrobat. He never swore that he would commit suicide and dive to deep perdition if she threw him over–none of these things. It is possible that she did not wish him to say or do such extravagances, but he had not played the game, and, knowing that something was badly wrong, she nursed a grievance, that horrid fosterling.