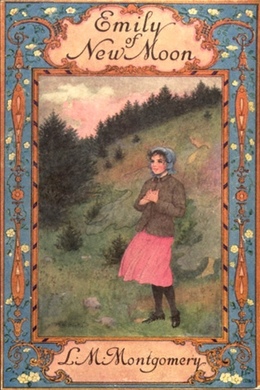 Emily Starr never knew what it was to be lonely——until her beloved father died. Now Emily’s an orphan, and her mother’s snobbish relatives are taking her to live with them at New Moon Farm. She’s sure she won’t be happy. Emily deals with stiff, stern Aunt Elizabeth and her malicious classmates by holding her head high and using her quick wit. Things begin to change when she makes friends, with Teddy, who does marvelous drawings; with Perry, who’s sailed all over the world with his father yet has never been to school; and above all, with Ilse, a tomboy with a blazing temper. Amazingly, Emily finds New Moon beautiful and fascinating. With new friends and adventures, Emily might someday think of herself as Emily of New Moon.

The house in the hollow was “a mile from anywhere”–so Maywood people said. It was situated in a grassy little dale, looking as if it had never been built like other houses but had grown up there like a big, brown mushroom. It was reached by a long, green lane and almost hidden from view by an encircling growth of young birches. No other house could be seen from it although the village was just over the hill. Ellen Greene said it was the lonesomest place in the world and vowed that she wouldn’t stay there a day if it wasn’t that she pitied the child.

Emily didn’t know she was being pitied and didn’t know what lonesomeness meant. She had plenty of company. There was Father– and Mike–and Saucy Sal. The Wind Woman was always around; and there were the trees–Adam-and-Eve, and the Rooster Pine, and all the friendly lady-birches.

And there was “the flash,” too. She never knew when it might come, and the possibility of it kept her a-thrill and expectant.

Emily had slipped away in the chilly twilight for a walk. She remembered that walk very vividly all her life–perhaps because of a certain eerie beauty that was in it–perhaps because “the flash” came for the first time in weeks–more likely because of what happened after she came back from it.

It had been a dull, cold day in early May, threatening to rain but never raining. Father had lain on the sitting-room lounge all day. He had coughed a good deal and he had not talked much to Emily, which was a very unusual thing for him. Most of the time he lay with his hands clasped under his head and his large, sunken, dark- blue eyes fixed dreamily and unseeingly on the cloudy sky that was visible between the boughs of the two big spruces in the front yard–Adam-and-Eve, they always called those spruces, because of a whimsical resemblance Emily had traced between their position, with reference to a small apple-tree between them, and that of Adam and Eve and the Tree of Knowledge in an old-fashioned picture in one of Ellen Greene’s books. The Tree of Knowledge looked exactly like the squat little apple-tree, and Adam and Eve stood up on either side as stiffly and rigidly as did the spruces.

Emily wondered what Father was thinking of, but she never bothered him with questions when his cough was bad. She only wished she had somebody to talk to. Ellen Greene wouldn’t talk that day either. She did nothing but grunt, and grunts meant that Ellen was disturbed about something. She had grunted last night after the doctor had whispered to her in the kitchen, and she had grunted when she gave Emily a bedtime snack of bread and molasses. Emily did not like bread and molasses, but she ate it because she did not want to hurt Ellen’s feelings. It was not often that Ellen allowed her anything to eat before going to bed, and when she did it meant that for some reason or other she wanted to confer a special favour.

Emily expected the grunting attack would wear off over night, as it generally did; but it had not, so no company was to be found in Ellen. Not that there was a great deal to be found at any time. Douglas Starr had once, in a fit of exasperation, told Emily that “Ellen Greene was a fat, lazy old thing of no importance,” and Emily, whenever she looked at Ellen after that, thought the description fitted her to a hair. So Emily had curled herself up in the ragged, comfortable old wing-chair and read The Pilgrim’s Progress all the afternoon. Emily loved The Pilgrim’s Progress. Many a time had she walked the straight and narrow path with Christian and Christiana–although she never liked Christiana’s adventures half as well as Christian’s. For one thing, there was always such a crowd with Christiana. She had not half the fascination of that solitary, intrepid figure who faced all alone the shadows of the Dark Valley and the encounter with Apollyon. Darkness and hobgoblins were nothing when you had plenty of company. But to be ALONE–ah, Emily shivered with the delicious horror of it!

When Ellen announced that supper was ready Douglas Starr told Emily to go out to it.

“I don’t want anything to-night. I’ll just lie here and rest. And when you come in again we’ll have a real talk, Elfkin.”

He smiled up at her his old, beautiful smile, with the love behind it, that Emily always found so sweet. She ate her supper quite happily–though it wasn’t a good supper. The bread was soggy and her egg was underdone, but for a wonder she was allowed to have both Saucy Sal and Mike sitting, one on each side of her, and Ellen only grunted when Emily fed them wee bits of bread and butter.