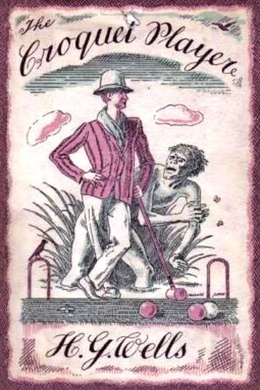 This allegorical satire about a man fleeing from his evil dreams was written under the influence of the Spanish Civil War. The croquet player, comfortably sipping a vermouth, listens to the strange and terrible tale of the haunted countryside. Wells’ modern ghost story of a remote English Village, Cainsmarsh. Dark events are plaguing its people. A terrified farmer murders a scarecrow. Family pets are being bludgeoned to death. Loving couples are turning on each other in vicious rage. People are becoming suspicious of every move each other makes. Children are coming to school with marks on them. One observer thinks there’s evil underground scattered all over the marsh, invading villagers’ minds, and it’s spreading. A well bred, affable & somewhat effeminate croquet player is told the strange story of Cainsmarsh and it’s impending doom as if its plight was the beginning of the end of civilization.

I have been talking to two very queer individuals and they have produced a peculiar disturbance of my mind. It is hardly an exaggeration to say that they have infected me and distressed me with some very strange and unpleasant ideas. I want to set down what it is they have said to me in the first place for my own sake, so as to clear up my thoughts about it. What they told me was fantastic and unreasonable but I shall feel surer about that if I set it down in writing. Moreover I want to get my story into a shape that will enable one or two sympathetic readers to reassure me about the purely imaginative quality of what these two men had to say.

It is a sort of ghost story they unfolded. But it is not an ordinary ghost story. It is much more realistic and haunting and disturbing than any ordinary ghost story. It is not a story of a haunted house or a haunted churchyard or anything so limited. The ghost they told me about was something much larger than that, a haunting of a whole countryside, something that began as an uneasiness and grew into a fear and became by slow degrees a spreading presence. And still it grew–in size, in power and intensity. Until it became a continual overshadowing dread. I do not like this ghost that grows and spreads, even though it does so only in the mind. But I had better begin at the beginning and tell about this story as far as I can, and the manner in which it came to me.

But first I had better give a few particulars about myself. Of course I would rather I did not, but I doubt if you will realize my position without it. I am probably one of the best croquet players alive, and that I am not a bit ashamed of saying. I am also a first-rate archer. One is neither of these things without a considerable amount of discipline and balance in one’s make-up. Many people, I know, find me a trifle effeminate and ridiculous because I make croquet my game; they say as much behind my back and at times they betray it to my face, and I admit there have been moments when I have been inclined to agree with them. But on the other hand quite a lot of people seem to like me, everybody calls me Georgie in an affectionate manner, and on the whole I am inclined to like myself. It takes all sorts to make a world and I see no sense in pretending to be the human norm when one is not. Regarded from a certain angle I am no doubt a soft, but all the same I can keep my head and temper at croquet and make a wooden ball perform like a trained animal. Even at tennis I can make some of the fiercer sort extremely cross and silly. And I can do sleight-of-hand tricks, for which you certainly need nerve and complete self-possession, as well as most professionals.

As a matter of fact a lot of these tremendous sporting people, record-breakers, gamblers, and so on, are much more akin to me than they like to think. There is a lot of sham in their pretension to hairiness and virility. At heart they are as tame as I am. They have chosen to be boxed up in games. I suppose cricket and hockey and so on are more gladiatorial than my sort of sport, aviation and motoring more lethal, and gambling more vexatious, but I do not see there is any greater reality in what they do than in what I do. Risk is not reality. They are players just as I am a player. They are enclosed with me in the same pleasant round of harmless and fruitless activities.

I admit I have had an exceptionally uneventful life. I missed the experience of the Great War by a couple of years and my life has always been an extremely sheltered and comfortable one. I was brought up by my paternal aunt, Miss Frobisher, THE Miss Frobisher of the Barton Chapel Case and the Woman’s World Humanity Movement, and it is only slowly that I have come to realize that my upbringing was–if I may be paradoxical–unusually banal. I have led a life largely of negatives and avoidances. I have been trained to keep calm and civil and not react excitedly to surprises. And above all to regard only ordinary decent everyday things seriously.

My aunt took me over at the age of three when my parents divorced and since then she has never let go of me. She is a woman with what, to be frank, one might call a natural hostility to sexual facts, and my parents’ misbehaviour–those were the days when the papers published full reports of divorce cases–and some of the details of the affair shocked her extremely. When I went to school at Harton, she took a house close by and entered me as a day-boy, and she did practically the same thing while I was at Keeble. Possibly I am naturally just a little inclined to be what the Americans call a sissy, and this tendency has been favoured by these circumstances.