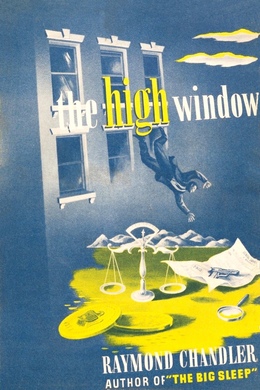 Philip Marlowe’s client, a dried-up husk of a woman, wants him to recover a rare gold coin called a Brasher Doubloon, missing from her late husband’s collection. Easy. Probably too easy. Unfortunately, each time the Doubloon pops up, so does a murder. That’s unlucky for a private investigator, because leaving a trail of corpses around LA gets cops’ noses out of joint. If Marlowe doesn’t wrap this one up fast, he’s going to end up in jail – or worse, in a box in the ground.

The house was on Dresden Avenue in the Oak Noll section of Pasadena, a big solid cool-looking house with burgundy brick walls, a terra cotta tile roof, and a white stone trim. The front windows were leaded downstairs. Upstairs windows were of the cottage type and had a lot of rococo imitation stonework trimming around them.

From the front wall and its attendant flowering bushes a half acre or so of fine green lawn drifted in a gentle slope down to the street, passing on the way an enormous deodar around which it flowed like a cool green tide around a rock. The sidewalk and the parkway were both very wide and in the parkway were three white acacias that were worth seeing. There was a heavy scent of summer on the morning and everything that grew was perfectly still in the breathless air they get over there on what they call a nice cool day.

All I knew about the people was that they were a Mrs. Elizabeth Bright Murdock and family and that she wanted to hire a nice clean private detective who wouldn’t drop cigar ashes on the floor and never carried more than one gun. And I knew she was the widow of an old coot with whiskers named Jasper Murdock who had made a lot of money helping out the community, and got his photograph in the Pasadena paper every year on his anniversary, with the years of his birth and death underneath, and the legend: His Life Was His Service.

I left my car on the street and walked over a few dozen stumble stones set into the green lawn, and rang the bell in the brick portico under a peaked roof. A low red brick wall ran along the front of the house the short distance from the door to the edge of the driveway. At the end of the walk, on a concrete block, there was a little painted Negro in white riding breeches and a green jacket and a red cap. He was holding a whip, and there was an iron hitching ring in the block at his feet. He looked a little sad, as if he had been waiting there a long time and was getting discouraged. I went over and patted his head while I was waiting for somebody to come to the door.

After a while a middle-aged sourpuss in a maid’s costume opened the front door about eight inches and gave me the beady eye.

“Philip Marlowe,” I said. “Calling on Mrs. Murdock. By appointment.”

The middle-aged sourpuss ground her teeth, snapped her eyes shut, snapped them open and said in one of those angular hardrock pioneer-type voices: “Which one?”

“Which Mrs. Murdock?” she almost screamed at me.

“Mrs. Elizabeth Bright Murdock,” I said. “I didn’t know there was more than one.”

She still had the door a scant eight inches open. She poked the end of her nose and a thin muscular hand into the opening. I got my wallet out and got one of the cards with just my name on it and put it in the hand. The hand and nose went in and the door slammed in my face.

I thought that maybe I ought to have gone to the back door. I went over and patted the little Negro on the head again.

Time passed, quite a lot of time. I stuck a cigarette in my mouth but didn’t light it. The Good Humor man went by in his little blue and white wagon, playing Turkey in the Straw on his music box. A large black and gold butterfly fishtailed in and landed on a hydrangea bush almost at my elbow, moved its wings slowly up and down a few times, then took off heavily and staggered away through the motionless hot scented air.

I went in. The room beyond was large and square and sunken and cool and had the restful atmosphere of a funeral chapel and something of the same smell. Tapestry on the blank roughened stucco walls, iron grilles imitating balconies outside high side windows, heavy carved chairs with plush seats and tapestry backs and tarnished gilt tassels hanging down their sides. At the back a stained-glass window about the size of a tennis court. Curtained french doors underneath it. An old musty, fusty, narrow-minded, clean and bitter room. It didn’t look as if anybody ever sat in it or would ever want to. Marble-topped tables with crooked legs, gilt clocks, pieces of small statuary in two colors of marble. A lot of junk that would take a week to dust. A lot of money, and all wasted. Thirty years before, in the wealthy close-mouthed provincial town Pasadena then was, it must have seemed like quite a room.

We left it and went along a hallway and after a while the sourpuss opened a door and motioned me in.

“Mr. Marlowe,” she said through the door in a nasty voice, and went away grinding her teeth.