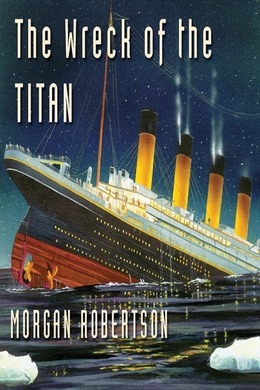 The Wreck of the Titan

Once seen as a prediction of the sinking of the Titanic, this novella was written 14 years before that ill-fated event of 1912. Those striking similarities can be examined again in this new edition. John Rowland, a disgraced former Royal Navy lieutenant, has taken employment as a lowly deck hand aboard the largest ship ever to have sailed, the Titan. One night in deep fog, the ship strikes a gigantic iceberg and sinks almost immediately. Hailed in equal measures as a prophetic work and the work of pure coincidence. Certainly the similarities are striking: two unsinkable ships steam ahead in treacherous conditions, carrying privileged passengers, with insufficient lifeboats aboard.

She was the largest craft afloat and the greatest of the works of men. In her construction and maintenance were involved every science, profession, and trade known to civilization. On her bridge were officers, who, besides being the pick of the Royal Navy, had passed rigid examinations in all studies that pertained to the winds, tides, currents, and geography of the sea; they were not only seamen, but scientists. The same professional standard applied to the personnel of the engine-room, and the steward’s department was equal to that of a first-class hotel.

Two brass bands, two orchestras, and a theatrical company entertained the passengers during waking hours; a corps of physicians attended to the temporal, and a corps of chaplains to the spiritual, welfare of all on board, while a well-drilled fire-company soothed the fears of nervous ones and added to the general entertainment by daily practice with their apparatus.

From her lofty bridge ran hidden telegraph lines to the bow, stern engine-room, crow’s-nest on the foremast, and to all parts of the ship where work was done, each wire terminating in a marked dial with a movable indicator, containing in its scope every order and answer required in handling the massive hulk, either at the dock or at sea–which eliminated, to a great extent, the hoarse, nerve-racking shouts of officers and sailors.

From the bridge, engine-room, and a dozen places on her deck the ninety-two doors of nineteen water-tight compartments could be closed in half a minute by turning a lever. These doors would also close automatically in the presence of water. With nine compartments flooded the ship would still float, and as no known accident of the sea could possibly fill this many, the steamship Titan was considered practically unsinkable.

Built of steel throughout, and for passenger traffic only, she carried no combustible cargo to threaten her destruction by fire; and the immunity from the demand for cargo space had enabled her designers to discard the flat, kettle-bottom of cargo boats and give her the sharp dead-rise–or slant from the keel–of a steam yacht, and this improved her behavior in a seaway. She was eight hundred feet long, of seventy thousand tons’ displacement, seventy-five thousand horse-power, and on her trial trip had steamed at a rate of twenty-five knots an hour over the bottom, in the face of unconsidered winds, tides, and currents. In short, she was a floating city–containing within her steel walls all that tends to minimize the dangers and discomforts of the Atlantic voyage–all that makes life enjoyable.

Unsinkable–indestructible, she carried as few boats as would satisfy the laws. These, twenty-four in number, were securely covered and lashed down to their chocks on the upper deck, and if launched would hold five hundred people. She carried no useless, cumbersome life-rafts; but–because the law required it–each of the three thousand berths in the passengers’, officers’, and crew’s quarters contained a cork jacket, while about twenty circular life-buoys were strewn along the rails.

In view of her absolute superiority to other craft, a rule of navigation thoroughly believed in by some captains, but not yet openly followed, was announced by the steamship company to apply to the Titan: She would steam at full speed in fog, storm, and sunshine, and on the Northern Lane Route, winter and summer, for the following good and substantial reasons: First, that if another craft should strike her, the force of the impact would be distributed over a larger area if the Titan had full headway, and the brunt of the damage would be borne by the other. Second, that if the Titan was the aggressor she would certainly destroy the other craft, even at half-speed, and perhaps damage her own bows; while at full speed, she would cut her in two with no more damage to herself than a paintbrush could remedy. In either case, as the lesser of two evils, it was best that the smaller hull should suffer. A third reason was that, at full speed, she could be more easily steered out of danger, and a fourth, that in case of an end-on collision with an iceberg–the only thing afloat that she could not conquer–her bows would be crushed in but a few feet further at full than at half speed, and at the most three compartments would be flooded–which would not matter with six more to spare.

So, it was confidently expected that when her engines had limbered themselves, the steamship Titan would land her passengers three thousand miles away with the promptitude and regularity of a railway train. She had beaten all records on her maiden voyage, but, up to the third return trip, had not lowered the time between Sandy Hook and Daunt’s Rock to the five-day limit; and it was unofficially rumored among the two thousand passengers who had embarked at New York that an effort would now be made to do so.