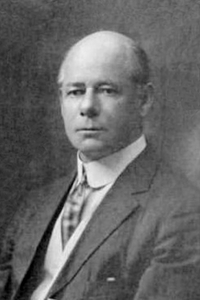 Morgan Andrew Robertson was a well-known American author of short stories and novels and the self-claimed inventor of the periscope. As a child he went to sea as a cabin boy and was in the merchant service from 1866 to 1877, rising to first mate. Tiring of life at sea, he studied jewelry making at Cooper Union in New York City and worked for 10 years as a diamond setter. When that work began to impair his vision, he turned to writing sea stories, placing his work in such popular magazines as McClure’s and the Saturday Evening Post. Robertson never made much money from his writing, a circumstance that greatly embittered him. Nevertheless, from the early 1890s until his death in 1915 he supported himself as a writer and enjoyed the company of artists and writers in a small circle of New York’s bohemia. He is best known for his short novel Futility (_Wreck of the Titan), a story featuring an enormous British passenger liner called the SS Titan, which, deemed to be unsinkable, carries an insufficient number of lifeboats. On a voyage in the month of April, the Titan hits an iceberg and sinks in the North Atlantic, resulting in the loss of almost everyone on board, even though the book was published fourteen years before the actual RMS Titanic hit an iceberg on the night of April 15, 1912 and sank to the bottom of the North Atlantic.

This anthology contains the strangest nautical tales. These are not your typical ghost stories; rather, they walk the line between science, the supernat...read more »

Once seen as a prediction of the sinking of the Titanic, this novella was written 14 years before that ill-fated event of 1912. Those striking similarit...read more »