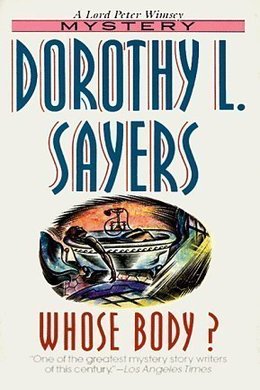 There’s a corpse in the bathtub, wearing nothing but a pair of pince-nez spectacles. Enter Lord Peter Wimsey, the original gentleman sleuth. Urged to investigate by his mother, the Dowager Duchess of Denver, Lord Peter quickly ascertains that the sudden disappearance of a well-known financier is in some way connected to the body in the bathroom. But discovering exactly which way they’re related leads the amateur detective on a merry chase. Written by a master of the detective story, this atmospheric tale abounds in the cozy delights of an English murder mystery. Dorothy L. Sayers ranks with Agatha Christie as a defining author of the genre. A novelist, essayist, and medieval scholar, Sayers was among the first women to receive an Oxford degree, and her translations of Dante remain in wide circulation. This novel marks the debut of her most popular creation, Lord Peter Wimsey, whose continuing adventures unfold amid the lively world of upper-crust British society in the 1920s.

The taxi man, irritated at receiving this appeal while negotiating the intricacies of turning into Lower Regent Street across the route of a 19 ‘bus, a 38-B and a bicycle, bent an unwilling ear.

“I’ve left the catalogue behind,” said Lord Peter deprecatingly, “uncommonly careless of me. D’you mind puttin’ back to where we came from?”

“Thought you was in a hurry,” said the man, overcome with a sense of injury.

“I’m afraid it’s an awkward place to turn in,” said Lord Peter, answering the thought rather than the words. His long, amiable face looked as if it had generated spontaneously from his top hat, as white maggots breed from Gorgonzola.

The taxi, under the severe eye of a policeman, revolved by slow jerks with a noise like the grinding of teeth.

The block of new, perfect and expensive flats in which Lord Peter dwelt upon the second floor, stood directly opposite the Green Park, in a spot for many years occupied by the skeleton of a frustrate commercial enterprise. As Lord Peter let himself in he heard his man’s voice in the library, uplifted in that throttled stridency peculiar to well-trained persons using the telephone.

“I believe that’s his lordship just coming in again–if your Grace would kindly hold the line a moment.”

“Her Grace has just called up from Denver, my lord. I was just saying your lordship had gone to the sale when I heard your lordship’s latchkey.”

“Thanks,” said Lord Peter; “and you might find me my catalogue, would you? I think I must have left it in my bedroom, or on the desk.”

He sat down to the telephone with an air of leisurely courtesy, as though it were an acquaintance dropped in for a chat.

“Oh, there you are, dear,” replied the voice of the Dowager Duchess. “I was afraid I’d just missed you.”

“Well, you had, as a matter of fact. I’d just started off to Brocklebury’s sale to pick up a book or two, but I had to come back for the catalogue. What’s up?”

“Such a quaint thing,” said the Duchess. “I thought I’d tell you. You know little Mr. Thipps?”

“Mrs. Throgmorton’s just been in, in quite a state of mind.”

“Mr. Thipps rang them up this morning. It was his day to come down, you know.”

“He rang them up to say he couldn’t. He was so upset, poor little man. He’d found a dead body in his bath.”

“What?–no, no, we haven’t finished. Please don’t cut us off. Hullo! Hullo! Is that you, Mother? Hullo!–Mother!–Oh yes–sorry, the girl was trying to cut us off. What sort of body?”

“A dead man, dear, with nothing on but a pair of pince-nez. Mrs. Throgmorton positively blushed when she was telling me. I’m afraid people do get a little narrow-minded in country vicarages.”

“Well, it sounds a bit unusual. Was it anybody he knew?”

“No, dear, I don’t think so, but, of course, he couldn’t give her many details. She said he sounded quite distracted. He’s such a respectable little man–and having the police in the house, and so on, really worried him.”

“Poor little Thipps! Uncommonly awkward for him. Let’s see, he lives in Battersea, doesn’t he?”

“Yes, dear; 59 Queen Caroline Mansions; opposite the Park. That big block just round the corner from the Hospital. I thought perhaps you’d like to run round and see him and ask if there’s anything we can do. I always thought him a nice little man.”

“Oh, quite,” said Lord Peter, grinning at the telephone. The Duchess was always of the greatest assistance to his hobby of criminal investigation, though she never alluded to it, and maintained a polite fiction of its non-existence.

“What time did it happen, Mother?”

“I think he found it early this morning, but, of course, he didn’t think of telling the Throgmortons just at first. She came up to me just before lunch–so tiresome, I had to ask her to stay. Fortunately, I was alone. I don’t mind being bored myself, but I hate having my guests bored.”

“Poor old Mother! Well, thanks awfully for tellin’ me. I think I’ll send Bunter to the sale and toddle round to Battersea now an’ try and console the poor little beast. So-long.”

“Her Grace tells me that a respectable Battersea architect has discovered a dead man in his bath.”

“Very, Bunter. Your choice of words is unerring. I wish Eton and Balliol had done as much for me. Have you found the catalogue?”