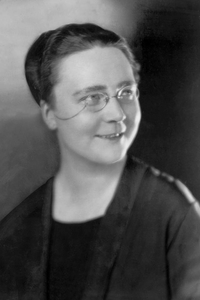 Sayers was a renowned English crime writer, poet, playwright, essayist, translator, Christian humanist, and a student of classical and modern languages. She is best known for her mysteries, a series of novels and short stories set between the First and Second World Wars that feature English aristocrat and amateur sleuth Lord Peter Wimsey, that remain popular to this day. However, Sayers herself considered her translation of Dante’s Divine Comedy to be her best work. She is also known for her plays, literary criticism and essays.

Lord Peter Wimsey and his bride, mystery writer Harriet Vane, start their honeymoon with murder. The former owner of Tallboys estate is dead in the cell...read more »

When blood stains his family name, Lord Peter fights to save what he holds most dear After three months in Corsica, Lord Peter Wimsey has begun to forge...read more »

When Harriet Vane finds a dead body on the beach, she and Lord Peter Wimsey must solve a murder when all the evidence has washed out to sea Harriet Vane...read more »

When ad man Victor Dean falls down the stairs in the offices of Pym’s Publicity, a respectable London advertising agency, it looks like an accident. The...read more »

Mystery novelist Harriet Vane knew all about poisons, and when her fiance died in the manner prescribed in one of her books, a jury of her peers had a h...read more »

During a painting retreat, a killer takes a creative approach to the ancient art of murder. The majestic landscape of the Scottish coast has attracted a...read more »

From the first pages of Genesis, it is clear that God and man share one vital trait: the ability to create great works out of nothing. More than any oth...read more »

Lord Peter Wimsey and his manservant Bunter are halfway across the wild flatlands of East Anglia when they make a wrong turn, straight into a ditch. The...read more »

On 15 August 778, Charlemagne’s army was returning from a successful expedition against Saracen Spain when its rearguard was ambushed in a remote Pyrene...read more »

Unpleasantness at the Bellona Club (1968)

90-year-old General Fentiman was definitely dead, but no one knew exactly when he had died – and the time of death was the determining factor in a half-...read more »

There’s a corpse in the bathtub, wearing nothing but a pair of pince-nez spectacles. Enter Lord Peter Wimsey, the original gentleman sleuth. Urged to in...read more »