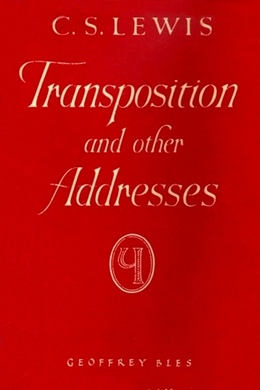 Transposition and Other Addresses

This book contains a selection of the too numerous addresses which Lewis gave during the late war and the years that immediately followed it. All were composed in response to personal requests and for particular audiences, without thought of subsequent publication. As a result, in one or two places they seem to repeat, though they really anticipated, sentences which had already appeared in print. The period from which these pieces date was an exceptional one; and though Lewis do not think to have altered any belief that they embody, he could not totally recapture the tone and temper in which they were written. Nor would those who wanted to have them in a permanent form be pleased with a patchwork. It has therefore seemed better to let them go with only a few verbal corrections.

In the church to which I belong this day is set apart for commemorating the descent of the Holy Ghost upon the first Christians shortly after the Ascension. I want to consider one of the phenomena which accompanied, or followed, this descent; the phenomenon which our translation calls “speaking with tongues” and which the learned call glossolalia. You will not suppose that I think this the most important aspect of Pentecost, but I have two reasons for selecting it. In the first place it would be ridiculous for me to speak about the nature of the Holy Ghost or the modes of His operation: that would be an attempt to teach where I have nearly all to learn. In the second place, glossolalia has often been a stumbling-block to me. It is, to be frank, an embarrassing phenomenon. St. Paul himself seems to have been rather embarrassed by it in 1 Corinthians and labours to turn the desire and the attention of the Church to more obviously edifying gifts. But he goes no further. He throws in almost parenthetically the statement that he himself spoke with tongues more than anyone else, and he does not question the spiritual, or supernatural, source of the phenomenon.

The difficulty I feel is this. On the one hand, glossolalia has remained an intermittent “variety of religious experience” down to the present day. Every now and then we hear that in some revivalist meeting one or more of those present has burst into a torrent of what appears to be gibberish. The thing does not seem to be edifying, and all non-Christian opinion would regard it as a kind of hysteria, an involuntary discharge of nervous excitement. A good deal even of Christian opinion would explain most instances of it in exactly the same way; and I must confess that it would be very hard to believe that in all instances of it the Holy Ghost is operating. We suspect, even if we cannot be sure, that it is usually an affair of the nerves. That is one horn of the dilemma. On the other hand, we cannot as Christians shelve the story of Pentecost or deny that there, at any rate, the speaking with tongues was miraculous. For the men spoke not gibberish but languages unknown to them though known to other people present. And the whole event of which this makes part is built into the very fabric of the birth-story of the Church. It is this very event which the risen Lord had told the Church to wait for–almost in the last words He uttered before His ascension. It looks, therefore, as if we shall have to say that the very same phenomenon which is sometimes not only natural but even pathological is at other times (or at least at one other time) the organ of the Holy Ghost. And this seems at first very surprising and very open to attack. The sceptic will certainly seize this opportunity to talk to us about Occam’s razor, to accuse us of multiplying hypotheses. If most instances of glossolalia are covered by hysteria, is it not (he will ask) extremely probable that that explanation covers the remaining instances too?