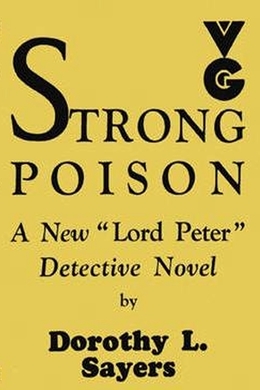 Mystery novelist Harriet Vane knew all about poisons, and when her fiance died in the manner prescribed in one of her books, a jury of her peers had a hangman’s noose in mind. But Lord Peter Wimsey was determined to find her innocent–as determined as he was to make her his wife.

There were crimson roses on the bench; they looked like splashes of blood.

The judge was an old man; so old, he seemed to have outlived time and change and death. His parrot-face and parrot-voice were dry, like his old, heavily-veined hands. His scarlet robe clashed harshly with the crimson of the roses. He had sat for three days in the stuffy court, but he showed no sign of fatigue.

He did not look at the prisoner as he gathered his notes into a neat sheaf and turned to address the jury, but the prisoner looked at him. Her eyes, like dark smudges under the heavy square brows, seemed equally without fear and without hope. They waited.

“Members of the jury–”

The patient old eyes seemed to sum them up and take stock of their united intelligence. Three respectable tradesmen–a tall, argumentative one, a stout, embarrassed one with a drooping moustache, and an unhappy one with a bad cold; a director of a large company, anxious not to waste valuable time; a publican, incongruously cheerful; two youngish men of the artisan class; a nondescript, elderly man, of educated appearance, who might have been anything; an artist with a red beard disguising a weak chin; three women–an elderly spinster, a stout capable woman who kept a sweet-shop, and a harassed wife and mother whose thoughts seemed to be continually straying to her abandoned hearth.

“Members of the jury–you have listened with great patience and attention to the evidence in this very distressing case, and it is now my duty to sum up the facts and arguments which have been put before you by the learned Attorney-General and by the learned Counsel for the Defence, and to put them in order as clearly as possible, so as to help you in forming your decision.

“But first of all, perhaps I ought to say a few words with regard to that decision itself. You know, I am sure, that it is a great principle of English law that every accused person is held to be innocent unless and until he is proved otherwise. It is not necessary for him, or her, to prove innocence; it is, in the modern slang phrase, ‘up to’ the Crown to prove guilt, and unless you are quite satisfied that the Crown has done this beyond all reasonable doubt, it is your duty to return a verdict of ‘Not Guilty.’ That does not necessarily mean that the prisoner has established her innocence by proof; it simply means that the Crown has failed to produce in your minds an undoubted conviction of her guilt.”

Salcombe Hardy, lifting his drowned-violet eyes for a moment from his reporter’s note-book, scribbled two words on a slip of paper and pushed them over to Waffles Newton. “Judge hostile.” Waffles nodded. They were old hounds on this blood-trail.

The judge creaked on.

“You may perhaps wish to hear from me exactly what is meant by those words ‘reasonable doubt.’ They mean, just so much doubt as you might have in every-day life about an ordinary matter of business. This is a case of murder, and it might be natural for you to think that, in such a case, the words mean more than this. But that is not so. They do not mean that you must cast about for fantastical solutions of what seems to you plain and simple. They do not mean those nightmare doubts which sometimes torment us at four o’clock in the morning when we have not slept very well. They only mean that the proof must be such as you would accept about a plain matter of buying and selling, or some such commonplace transaction. You must not strain your belief in favour of the prisoner any more, of course, than you must accept proof of her guilt without the most careful scrutiny.

“Having said just these few words, so that you may not feel too much overwhelmed by the heavy responsibility laid upon you by your duty to the State, I will now begin at the beginning and try to place the story that we have heard, as clearly as possible before you.

“The case for the Crown is that the prisoner, Harriet Vane, murdered Philip Boyes by poisoning him with arsenic. I need not detain you by going through the proofs offered by Sir James Lubbock and the other doctors who have given evidence as to the cause of death. The Crown says he died of arsenical poisoning, and the defence do not dispute it. The evidence is, therefore, that the death was due to arsenic, and you must accept that as a fact. The only question that remains for you is whether, in fact, that arsenic was deliberately administered by the prisoner with intent to murder.

“The deceased, Philip Boyes, was, as you have heard, a writer. He was thirty-six years old, and he had published five novels and a large number of essays and articles. All these literary works were of what is sometimes called an ‘advanced’ type. They preached doctrines which may seem to some of us immoral or seditious, such as atheism, and anarchy, and what is known as free love. His private life appears to have been conducted, for some time at least, in accordance with these doctrines.