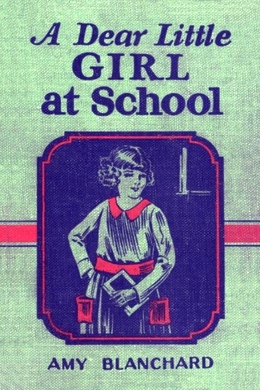 A Dear Little Girl at School

A wholesome child’s story, one of the sort that commends itself to children’s sympathies and will be conned again and again. No mother need hesitate ever putting this or any other of Miss Blanchard’s stories into her little daughter’s hands.

Edna and Cousin Ben Barker were on the back porch. It was a favorite place, for it was always shady there in summer and out of the wind on cold days. If big Cousin Ben did not always like to be where Edna was, on the other hand Edna invariably sought out Cousin Ben if he were to be found about the premises.

On this special afternoon he was doing something to his wheel, getting it in order for a long ride which he had planned for the next day. Edna stood watching him, ready to hand a tool or run for a piece of rag to be used in cleaning, or to fill the oil can from the bottle on the shelf upstairs.

“Where are you going to-day, Cousin Ben?” Edna always asked this for Cousin Ben’s replies were generally so funny.

“Why will he jump up?” asked Edna in pleased expectancy of something amusing.

“Because the dog-wood bark, you know.”

“Of course, and I dare say you know the dog-wood bark, too, don’t you?”

Cousin Ben went on burnishing the metal he was at work upon. “You see,” he continued after a moment, “the catkins will all be out and when I meet one I shall say, ‘Pussy, will oh, will you tell me the way to the elder Berries.’”

“What do you suppose she will say?” inquired Edna settling herself well content to continue this sort of talk, though thinking it was scarcely the season for Pussy-willows.

“She will say: ‘The elder Berry? My dear boy, any dog ought to know the way there.’ You see she knows I am a Barker.”

“And I will say, ‘Yes, madam, but that sassy Fras always tries to get in my path. It is a very easy matter to whip poor Will, but sassy Fras is another matter.’ Then she will ask: ‘Did you ever try to haze L. Nutt?’ and I will reply, ‘Chestnuts!’ for I don’t like to talk about hazing, being in a position to expect a little of it any day. Well, Ande, I must be off or I will find Pip’s sis away.” Cousin Ben always called Edna Ande because he declared that was what her name really was but had been turned hind side before. Some persons, Edna’s sister Celia and Agnes Evans, for instance, called Cousin Ben a very silly boy, but Edna thought his kind of nonsense great fun.

It was an afternoon in autumn. For some time past, Edna and her sister had been going into the city to school every day, but this was the last week when this would be done, for after this they would go only on Mondays returning on Fridays till the days became long again. During the winter when it was still dark at seven in the morning, and when the afternoons were so short, it had seemed better that they should not come home every day. Therefore, as Aunt Elizabeth Horner and Uncle Justus wanted much to have them remain, it was so arranged. Edna was a great favorite with her Uncle Justus, for she had spent the winter previous at his house and had gone to his school. Then, on account of Mr. Conway’s business, the family had removed from the town in which they had formerly lived and had taken a house a little out of the city.

Like most children Edna loved the country and was glad of the change. A little further up the road lived her friend Dorothy Evans and her sister Agnes, the latter was a little older than Edna’s sister Celia. All four girls attended Uncle Justus’ school and so did Margaret MacDonald, the adopted daughter of good Mrs. MacDonald who lived in the big gray stone house with the lovely grounds. Margaret was having a pretty hard time of it, as she had never had much opportunity of going to school and was far behind the girls of her own age. Edna and Dorothy were her staunch defenders, however and when matters came to a too difficult pass the older girls were appealed to and could always straighten out whatever was wrong. Frank and Charlie, Edna’s brothers, were almost too large for Uncle Justus’ school, where only little fellows went, so they went elsewhere to the school which Roger and Steve Porter attended. It was Cousin Ben’s first year at college, and he was housed at the Conways, his mother being an elder sister of Edna’s mother.

After seeing Cousin Ben start off, Edna left the porch and stood for a moment thinking what she would do next. This being the last time she would be at home for the entire week, she concluded she ought to make the most of it, but first she must get together such things as she should want for Monday. “Tuesday, Wednesday and Thursday afternoons, and Monday, too. There are only four, after all,” she said, counting the days on her fingers. “It seems very much longer when you first think of it.” And then, as she continued to think, to her surprise she discovered that only Tuesdays, Wednesdays and Thursdays would be the entire days she would spend away from home.