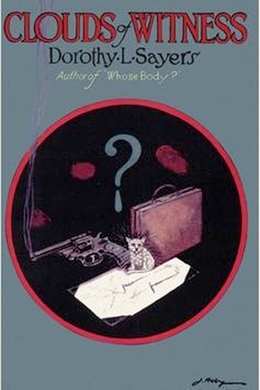 When blood stains his family name, Lord Peter fights to save what he holds most dear After three months in Corsica, Lord Peter Wimsey has begun to forget that the gray, dangerous moors of England ever existed. But traveling through Paris, he receives a shock that jolts him back to reality. He sees it in the headlines splashed across every English paper—his brother Gerald has been arrested for murder. The trouble began at the family estate in Yorkshire, where Gerald was hunting with the man soon to be his brother-in-law, Captain Denis Cathcart. One night, Gerald confronts Cathcart with allegations about his unsavory past, leading the captain to call off the wedding. Just a few hours later, Cathcart is dead, with Gerald presumed to be the only one who could have fired the fatal shot. The clock is ticking, and only England’s premier sleuth can get to the bottom of this murky mystery.

Lord Peter Wimsey stretched himself luxuriously between the sheets provided by the Hôtel Meurice. After his exertions in the unravelling of the Battersea Mystery, he had followed Sir Julian Freke’s advice and taken a holiday. He had felt suddenly weary of breakfasting every morning before his view over the Green Park; he had realised that the picking up of first editions at sales afforded insufficient exercise for a man of thirty-three; the very crimes of London were over-sophisticated. He had abandoned his flat and his friends and fled to the wilds of Corsica. For the last three months he had forsworn letters, newspapers, and telegrams. He had tramped about the mountains, admiring from a cautious distance the wild beauty of Corsican peasant-women, and studying the vendetta in its natural haunt. In such conditions murder seemed not only reasonable, but lovable. Bunter, his confidential man and assistant sleuth, had nobly sacrificed his civilised habits, had let his master go dirty and even unshaven, and had turned his faithful camera from the recording of finger-prints to that of craggy scenery. It had been very refreshing.

Now, however, the call of the blood was upon Lord Peter. They had returned late last night in a vile train to Paris, and had picked up their luggage. The autumn light, filtering through the curtains, touched caressingly the silver-topped bottles on the dressing-table, outlined an electric lamp-shade and the shape of the telephone. A noise of running water near by proclaimed that Bunter had turned on the bath (h. & c.) and was laying out scented soap, bath-salts, the huge bath-sponge, for which there had been no scope in Corsica, and the delightful flesh-brush with the long handle, which rasped you so agreeably all down the spine. “Contrast,” philosophised Lord Peter sleepily, “is life. Corsica–Paris–then London…. Good morning, Bunter.”

“Thanks,” said Lord Peter. He blinked at the sunlight.

It was a glorious bath. He wondered, as he soaked in it, how he could have existed in Corsica. He wallowed happily and sang a few bars of a song. In a soporific interval he heard the valet de chambre bringing in coffee and rolls. Coffee and rolls! He heaved himself out with a splash, towelled himself luxuriously, enveloped his long-mortified body in a silken bath-robe, and wandered back.

To his immense surprise he perceived Mr. Bunter calmly replacing all the fittings in his dressing-case. Another astonished glance showed him the bags–scarcely opened the previous night–repacked, relabelled, and standing ready for a journey.

“Excuse me, my lord,” said Mr. Bunter, deferentially, “but, having seen The Times (delivered here every morning by air, my lord; and very expeditious I’m sure, all things considered), I made no doubt your lordship would be wishing to go to Riddlesdale at once.”

“Riddlesdale!” exclaimed Peter. “What’s the matter? Anything wrong with my brother?”

For answer Mr. Bunter handed him the paper, folded open at the heading:

Lord Peter stared as if hypnotised.

“I thought your lordship wouldn’t wish to miss anything,” said Mr. Bunter, “so I took the liberty—-“

Lord Peter pulled himself together.

“When’s the next train?” he asked.

“I beg your lordship’s pardon–I thought your lordship would wish to take the quickest route. I took it on myself to book two seats in the aeroplane Victoria. She starts at 11.30.”

Lord Peter looked at his watch.

“Ten o’clock,” he said. “Very well. You did quite right. Dear me! Poor old Gerald arrested for murder. Uncommonly worryin’ for him, poor chap. Always hated my bein’ mixed up with police-courts. Now he’s there himself. Lord Peter Wimsey in the witness-box–very distressin’ to feelin’s of a brother. Duke of Denver in the dock–worse still. Dear me! Well, I suppose one must have breakfast.”

“Yes, my lord. Full account of the inquest in the paper, my lord.”

“Parker? That’s good. Splendid old Parker! Wonder how he managed to get put on to it. How do things look, Bunter?”

“If I may say so, my lord, I fancy the investigation will prove very interesting. There are several extremely suggestive points in the evidence, my lord.”

“From a criminological point of view I daresay it is interesting,” replied his lordship, sitting down cheerfully to his café au lait, “but it’s deuced awkward for my brother, all the same, havin’ no turn for criminology, what?”

“Ah, well!” said Mr. Bunter, “they say, my lord, there’s nothing like having a personal interest.”