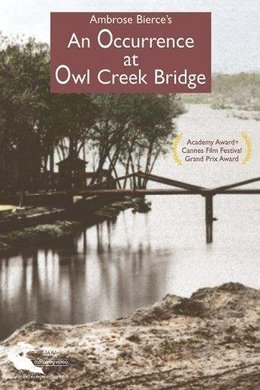 An Occurrence at Owl Creek Bridge

Peyton Farquhar, a confederate sympathizer, stands to be hanged for his role in a plot to demolish Owl Creek Bridge. As he awaits death, Farquhar considers the possibility of escape; the chances of slipping his bonds, swimming to safety, and returning to his family. An Occurrence at Owl Creek Bridge recounts the final moments before Farquhar is hanged, exploring the feelings of a man facing his death, and the close relationship between life and death.

A man stood upon a railroad bridge in northern Alabama, looking down into the swift water twenty feet below. The man’s hands were behind his back, the wrists bound with a cord. A rope closely encircled his neck. It was attached to a stout cross-timber above his head and the slack fell to the level of his knees. Some loose boards laid upon the ties supporting the rails of the railway supplied a footing for him and his executioners–two private soldiers of the Federal army, directed by a sergeant who in civil life may have been a deputy sheriff. At a short remove upon the same temporary platform was an officer in the uniform of his rank, armed. He was a captain. A sentinel at each end of the bridge stood with his rifle in the position known as “support,” that is to say, vertical in front of the left shoulder, the hammer resting on the forearm thrown straight across the chest–a formal and unnatural position, enforcing an erect carriage of the body. It did not appear to be the duty of these two men to know what was occurring at the center of the bridge; they merely blockaded the two ends of the foot planking that traversed it.

Beyond one of the sentinels nobody was in sight; the railroad ran straight away into a forest for a hundred yards, then, curving, was lost to view. Doubtless there was an outpost farther along. The other bank of the stream was open ground–a gentle slope topped with a stockade of vertical tree trunks, loopholed for rifles, with a single embrasure through which protruded the muzzle of a brass cannon commanding the bridge. Midway up the slope between the bridge and fort were the spectators–a single company of infantry in line, at “parade rest,” the butts of their rifles on the ground, the barrels inclining slightly backward against the right shoulder, the hands crossed upon the stock. A lieutenant stood at the right of the line, the point of his sword upon the ground, his left hand resting upon his right. Excepting the group of four at the center of the bridge, not a man moved. The company faced the bridge, staring stonily, motionless. The sentinels, facing the banks of the stream, might have been statues to adorn the bridge. The captain stood with folded arms, silent, observing the work of his subordinates, but making no sign. Death is a dignitary who when he comes announced is to be received with formal manifestations of respect, even by those most familiar with him. In the code of military etiquette silence and fixity are forms of deference.

The man who was engaged in being hanged was apparently about thirty-five years of age. He was a civilian, if one might judge from his habit, which was that of a planter. His features were good–a straight nose, firm mouth, broad forehead, from which his long, dark hair was combed straight back, falling behind his ears to the collar of his well fitting frock coat. He wore a moustache and pointed beard, but no whiskers; his eyes were large and dark gray, and had a kindly expression which one would hardly have expected in one whose neck was in the hemp. Evidently this was no vulgar assassin. The liberal military code makes provision for hanging many kinds of persons, and gentlemen are not excluded.

The preparations being complete, the two private soldiers stepped aside and each drew away the plank upon which he had been standing. The sergeant turned to the captain, saluted and placed himself immediately behind that officer, who in turn moved apart one pace. These movements left the condemned man and the sergeant standing on the two ends of the same plank, which spanned three of the cross-ties of the bridge. The end upon which the civilian stood almost, but not quite, reached a fourth. This plank had been held in place by the weight of the captain; it was now held by that of the sergeant. At a signal from the former the latter would step aside, the plank would tilt and the condemned man go down between two ties. The arrangement commended itself to his judgement as simple and effective. His face had not been covered nor his eyes bandaged. He looked a moment at his “unsteadfast footing,” then let his gaze wander to the swirling water of the stream racing madly beneath his feet. A piece of dancing driftwood caught his attention and his eyes followed it down the current. How slowly it appeared to move! What a sluggish stream!