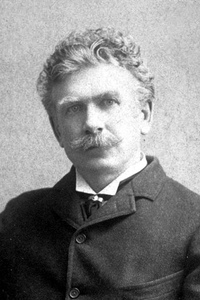 Ambrose Gwinnett Bierce was an American editorialist, journalist, short story writer, fabulist and satirist, and was considered a master of pure English by his contemporaries, and virtually everything that came from his pen was notable for its judicious wording and economy of style. His short stories are held among the best of the 19th century, providing a popular following based on his roots. He wrote realistically of the terrible things he had seen in the war in such stories as An Occurrence at Owl Creek Bridge, The Boarded Window, Killed at Resaca, and Chickamauga. In addition to his ghost and war stories, he also published several volumes of poetry. His Fantastic Fables anticipated the ironic style of grotesquerie that became a more common genre in the 20th century. One of Bierce’s most famous works is the much-quoted The Devil’s Dictionary, originally an occasional newspaper item, first published in book form in 1906 as The Cynic’s Word Book. It consists of satirical definitions of English words which lampoon cant and political double-talk.

A collection of essays in which Bierce talks about modern civilization and all its faults, the death penalty and many others. His arguments are still re...read more »

An Occurrence at Owl Creek Bridge (1890)

Peyton Farquhar, a confederate sympathizer, stands to be hanged for his role in a plot to demolish Owl Creek Bridge. As he awaits death, Farquhar consid...read more »

A collection of short fables and stories written under Bierce’s pseudonym, Dod Grile, and although one of his earliest published books, it still display...read more »

Over 200 fantastic fables from the bitter pen of Ambrose Bierce fill this little volume to overflowing with a rich feast of his misanthropy. Bierce didn...read more »

This engrossing tale presents as its central theme the ultimately unknowable – and untameable – essence of nature and the natural world. Told from sever...read more »