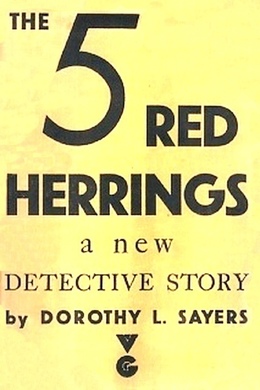 During a painting retreat, a killer takes a creative approach to the ancient art of murder. The majestic landscape of the Scottish coast has attracted artists and fishermen for centuries. In the idyllic village of Kirkcudbright, every resident and visitor has two things in common: They either fish or paint (or do both), and they all hate Sandy Campbell. Though a fair painter, he is a rotten human being, and cannot enter a pub without raising the blood pressure of everybody there. No one weeps when he dies. Campbell’s body is found at the bottom of a steep hill, and his easel stands at the top, suggesting that he took a tumble while painting. But something about the death doesn’t sit right with gentleman sleuth Lord Peter Wimsey. No one in Kirkcudbright liked Campbell, and six hated him enough to become suspects. Five are innocent, and the other is the perpetrator of one of the most ingenious murders Lord Peter has ever encountered.

If one lives in Galloway, one either fishes or paints. “Either” is perhaps misleading, for most of the painters are fishers also in their spare time. To be neither of these things is considered odd and almost eccentric. Fish is the standard topic of conversation in the pub and the post-office, in the garage and the street, with every sort of person, from the man who arrives for the season with three Hardy rods and a Rolls-Royce, to the man who leads a curious, contemplative life, watching the salmon-nets on the Dee. Weather, which in other parts of the Kingdom is gauged by the standards of the farmer, the gardener, and the weekender, is considered in Galloway in terms of fish and paint. The fisherman-painter has the best of the bargain as far as the weather goes, for the weather that is too bright for the trout deluges his hills and his sea with floods of radiant colour; the rain that interrupts picture-making puts water into the rivers and the locks and sends him hopefully forth with rod and creel; while on cold dull days, when there is neither purple on the hills nor fly on the river, he can join a friendly party in a cosy bar and exchange information about Cardinals and March Browns, and practise making intricate knots in gut.

The artistic centre of Galloway is Kirkcudbright, where the painters form a scattered constellation, whose nucleus is in the High Street, and whose outer stars twinkle in remote hillside cottages, radiating brightness as far as Gatehouse-of-Fleet. There are large and stately studios, panelled and high, in strong stone houses filled with gleaming brass and polished oak. There are workaday studios–summer perching-places rather than settled homes–where a good north light and a litter of brushes and canvas form the whole of the artistic stock-in-trade. There are little homely studios, gay with blue and red and yellow curtains and odd scraps of pottery, tucked away down narrow closes and adorned with gardens, where old-fashioned flowers riot in the rich and friendly soil. There are studios that are simply and solely barns, made beautiful by ample proportions and high-pitched rafters, and habitable by the addition of a tortoise stove and a gas-ring. There are artists who have large families and keep domestics in cap and apron; artists who engage rooms, and are taken care of by landladies; artists who live in couples or alone, with a woman who comes in to clean; artists who live hermit-like and do their own charing. There are painters in oils, painters in water-colour, painters in pastel, etchers and illustrators, workers in metal; artists of every variety, having this one thing in common–that they take their work seriously and have no time for amateurs.

Into this fishing and painting community, Lord Peter Wimsey was received on friendly and even affectionate terms. He could make a respectable cast, and he did not pretend to paint, and therefore, though English and an “in-comer,” gave no cause of offence. The Southron is tolerated in Scotland on the understanding that he does not throw his weight about, and from this peculiarly English vice Lord Peter was laudably free. True, his accent was affected and his behaviour undignified to a degree, but he had been weighed in the balance over many seasons and pronounced harmless, and when he indulged in any startling eccentricity, the matter was dismissed with a shrug and a tolerant, “Christ, it’s only his lordship.”

Wimsey was in the bar of the McClellan Arms on the evening that the unfortunate dispute broke out between Campbell and Waters. Campbell, the landscape painter, had had maybe one or two more wee ones than was absolutely necessary, especially for a man with red hair, and their effect had been to make him even more militantly Scottish than usual. He embarked on a long eulogy of what the Jocks had done in the Great War, only interrupting his tale to inform Waters in parenthesis that all the English were of mongrel ancestry and unable even to pronounce their own bluidy language.

Waters was an Englishman of good yeoman stock, and, like all Englishmen, was ready enough to admire and praise all foreigners except dagoes and niggers, but, like all Englishmen, he did not like to hear them praise themselves. To boast loudly in public of one’s own country seemed to him indecent–like enlarging on the physical perfections of one’s own wife in a smoking-room. He listened with that tolerant, petrified smile which the foreigner takes, and indeed quite correctly takes, to indicate a self-satisfaction so impervious that it will not even trouble to justify itself.