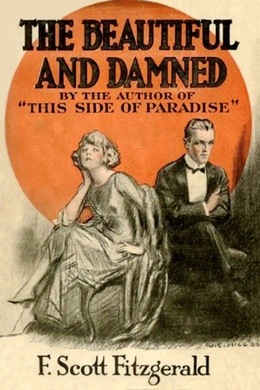 The Beautiful and Damned

Embellished with the author’s lyrical prose, here is the story of Harvard-educated, aspiring aeshete Anthony Patch and his beautiful wife, Gloria. As they await the inheritance of his grandfather’s fortune, their reckless marriage sways under the influence of alcohol and avarice. A devastating look at the nouveaux riches and New York nightlife, as well as the ruinous effects wild ambiion, The Beautiful and the Damned achieved stature as one of Fitzgerzld’s most accomplished novels. Its distinction as a classic endures to this day.

In 1913, when Anthony Patch was twenty-five, two years were already gone since irony, the Holy Ghost of this later day, had, theoretically at least, descended upon him. Irony was the final polish of the shoe, the ultimate dab of the clothes-brush, a sort of intellectual “There!”–yet at the brink of this story he has as yet gone no further than the conscious stage. As you first see him he wonders frequently whether he is not without honor and slightly mad, a shameful and obscene thinness glistening on the surface of the world like oil on a clean pond, these occasions being varied, of course, with those in which he thinks himself rather an exceptional young man, thoroughly sophisticated, well adjusted to his environment, and somewhat more significant than any one else he knows.

This was his healthy state and it made him cheerful, pleasant, and very attractive to intelligent men and to all women. In this state he considered that he would one day accomplish some quiet subtle thing that the elect would deem worthy and, passing on, would join the dimmer stars in a nebulous, indeterminate heaven half-way between death and immortality. Until the time came for this effort he would be Anthony Patch–not a portrait of a man but a distinct and dynamic personality, opinionated, contemptuous, functioning from within outward–a man who was aware that there could be no honor and yet had honor, who knew the sophistry of courage and yet was brave.

Anthony drew as much consciousness of social security from being the grandson of Adam J. Patch as he would have had from tracing his line over the sea to the crusaders. This is inevitable; Virginians and Bostonians to the contrary notwithstanding, an aristocracy founded sheerly on money postulates wealth in the particular.

Now Adam J. Patch, more familiarly known as “Cross Patch,” left his father’s farm in Tarrytown early in sixty-one to join a New York cavalry regiment. He came home from the war a major, charged into Wall Street, and amid much fuss, fume, applause, and ill will he gathered to himself some seventy-five million dollars.

This occupied his energies until he was fifty-seven years old. It was then that he determined, after a severe attack of sclerosis, to consecrate the remainder of his life to the moral regeneration of the world. He became a reformer among reformers. Emulating the magnificent efforts of Anthony Comstock, after whom his grandson was named, he levelled a varied assortment of uppercuts and body-blows at liquor, literature, vice, art, patent medicines, and Sunday theatres. His mind, under the influence of that insidious mildew which eventually forms on all but the few, gave itself up furiously to every indignation of the age. From an armchair in the office of his Tarrytown estate he directed against the enormous hypothetical enemy, unrighteousness, a campaign which went on through fifteen years, during which he displayed himself a rabid monomaniac, an unqualified nuisance, and an intolerable bore. The year in which this story opens found him wearying; his campaign had grown desultory; 1861 was creeping up slowly on 1895; his thoughts ran a great deal on the Civil War, somewhat on his dead wife and son, almost infinitesimally on his grandson Anthony.

Early in his career Adam Patch had married an anemic lady of thirty, Alicia Withers, who brought him one hundred thousand dollars and an impeccable entré into the banking circles of New York. Immediately and rather spunkily she had borne him a son and, as if completely devitalized by the magnificence of this performance, she had thenceforth effaced herself within the shadowy dimensions of the nursery. The boy, Adam Ulysses Patch, became an inveterate joiner of clubs, connoisseur of good form, and driver of tandems–at the astonishing age of twenty-six he began his memoirs under the title “New York Society as I Have Seen It.” On the rumor of its conception this work was eagerly bid for among publishers, but as it proved after his death to be immoderately verbose and overpoweringly dull, it never obtained even a private printing.

This Fifth Avenue Chesterfield married at twenty-two. His wife was Henrietta Lebrune, the Boston “Society Contralto,” and the single child of the union was, at the request of his grandfather, christened Anthony Comstock Patch. When he went to Harvard, the Comstock dropped out of his name to a nether hell of oblivion and was never heard of thereafter.

Young Anthony had one picture of his father and mother together–so often had it faced his eyes in childhood that it had acquired the impersonality of furniture, but every one who came into his bedroom regarded it with interest. It showed a dandy of the nineties, spare and handsome, standing beside a tall dark lady with a muff and the suggestion of a bustle. Between them was a little boy with long brown curls, dressed in a velvet Lord Fauntleroy suit. This was Anthony at five, the year of his mother’s death.