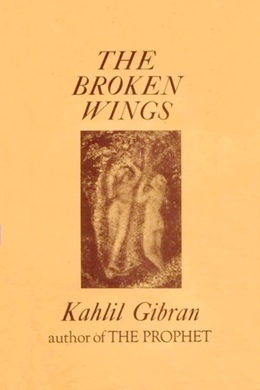 An exquisitely tender story of love that beats desperately against the taboos of Oriental tradition. With great sensitivity, Gibran describes his passion as a youth for Selma Karamy, the girl of Beirut who first unfolded to him the secrets of love. But it is a love that is doomed by a social convention which forces Selma into marriage with another man. Portraying the happiness and infinite sorrow of his relationship with Selma, Gibran at the same time probes the spiritual meaning of human existence with profound compassion.

My neighbours, you remember the dawn of youth with pleasure and regret its passing; but I remember it like a prisoner who recalls the bars and shackles of his jail. You speak of those years between infancy and youth as a golden era free from confinement and cares, but I call those years an era of silent sorrow which dropped as a seed into my heart and grew with it and could find no outlet to the world of Knowledge and wisdom until love came and opened the heart’s doors and lighted its corners. Love provided me with a tongue and tears. You people remember the gardens and orchids and the meeting places and street corners that witnessed your games and heard your innocent whispering; and I remember, too, the beautiful spot in North Lebanon. Every time I close my eyes I see those valleys full of magic and dignity and those mountains covered with glory and greatness trying to reach the sky. Every time I shut my ears to the clamour of the city I hear the murmur of the rivulets and the rustling of the branches. All those beauties which I speak of now and which I long to see, as a child longs for his mother’s breast, wounded my spirit, imprisoned in the darkness of youth, as a falcon suffers in its cage when it sees a flock of birds flying freely in the spacious sky. Those valleys and hills fired my imagination, but bitter thoughts wove round my heart a net of hopelessness.

Every time I went to the fields I returned disappointed, without understanding the cause of my disappointment. Every time I looked at the grey sky I felt my heart contract. Every time I heard the singing of the birds and babbling of the spring I suffered without understanding the reason for my suffering. It is said that unsophistication makes a man empty and that emptiness makes him carefree. It may be true among those who were born dead and who exist like frozen corpses; but the sensitive boy who feels much and knows little is the most unfortunate creature under the sun, because he is torn by two forces. the first force elevates him and shows him the beauty of existence through a cloud of dreams; the second ties him down to the earth and fills his eyes with dust and overpowers him with fears and darkness.

Solitude has soft, silky hands, but with strong fingers it grasps the heart and makes it ache with sorrow. Solitude is the ally of sorrow as well as a companion of spiritual exaltation.

The boy’s soul undergoing the buffeting of sorrow is like a white lily just unfolding. It trembles before the breeze and opens its heart to day break and folds its leaves back when the shadow of night comes. If that boy does not have diversion or friends or companions in his games his life will be like a narrow prison in which he sees nothing but spider webs and hears nothing but the crawling of insects.

That sorrow which obsessed me during my youth was not caused by lack of amusement, because I could have had it; neither from lack of friends, because I could have found them. That sorrow was caused by an inward ailment which made me love solitude. It killed in me the inclination for games and amusement. It removed from my shoulders the wings of youth and made me like a pong of water between mountains which reflects in its calm surface the shadows of ghosts and the colours of clouds and trees, but cannot find an outlet by which to pass singing to the sea.

Thus was my life before I attained the age of eighteen. That year is like a mountain peak in my life, for it awakened knowledge in me and made me understand the vicissitudes of mankind. In that year I was reborn and unless a person is born again his life will remain like a blank sheet in the book of existence. In that year, I saw the angels of heaven looking at me through the eyes of a beautiful woman. I also saw the devils of hell raging in the heart of an evil man. He who does not see the angels and devils in the beauty and malice of life will be far removed from knowledge, and his spirit will be empty of affection.