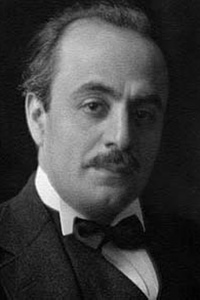 Khalil Gibran was a Lebanese artist, poet, and writer. After immigrating with his family to the United States as a young man, he studied art and began his literary career, writing in both English and Arabic. His romantic style was at the heart of a renaissance in modern Arabic literature, especially prose poetry, breaking away from the classical school. In Lebanon, he is still celebrated as a literary hero. He is chiefly known in the English-speaking world for The Prophet, an early example of inspirational fiction including a series of philosophical essays written in poetic English prose.

Gibran was a great admirer of poet and writer Francis Marrash, whose works he had studied at al-Hikma school in Beirut. According to orientalist Shmuel Moreh, Gibran’s own works echo Marrash’s style, many of his ideas, and at times even the structure of some of his works; Suheil Bushrui and Joe Jenkins have mentioned Marrash’s concept of universal love, in particular, in having left a “profound impression” on Gibran. The poetry of Gibran often uses formal language and spiritual terms; as one of his poems reveals: “But let there be spaces in your togetherness and let the winds of the heavens dance between you. Love one another but make not a bond of love: let it rather be a moving sea between the shores of your souls.”

Contains 56 parables, stories, and poems this book is considered to be the most important edition in the canon of Kahlil Gibran. His Romantic style was ...read more »

In Jesus Son of Man, Jesus is portrayed through the words of 77 contemporaries who knew him. Gibran allows the reader to see Jesus through the eyes of a...read more »

The garden outside of the home of Lazarus and his mother and sisters in Bethany Late afternoon of Manday, the day after the resurrection of Jesus of Naz...read more »

Poetry is wisdom that enchants the heart. Wisdom is poetry that sings in the mind. This book of aphorisms contains much of the poetry and wisdom that ha...read more »

When first published in the original Arabic, this book aroused considerable agitation and intrigue. It was burned publicly in the Beirut market place by...read more »

An exquisitely tender story of love that beats desperately against the taboos of Oriental tradition. With great sensitivity, Gibran describes his passio...read more »

The last book to be published while Gibran was still in this world, came into the poet’s hands two weeks before he was to lay aside all earthly volumes....read more »

The wisdom, poetic outlook, and deep humanity for which Gibran’s best-known work, The Prophet, is famous are also amply present in The Forerunner, publi...read more »

The prophet Almustafa who has lived in the foreign city of Orphalese for 12 years is about to board a ship which will carry him home. He is stopped by a...read more »

Shortly before his death Gibran completed this book. In these beautiful parables and drawings are crystallized his whole life’s message–a message that h...read more »