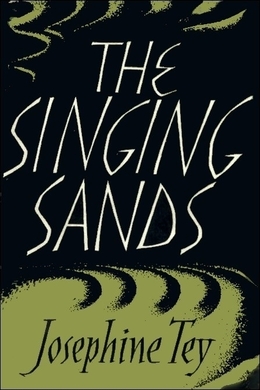 On sick leave from Scotland Yard, Inspector Alan Grant is planning a quiet holiday with an old school chum to recover from overwork and mental fatigue. Traveling on the night train to Scotland, however, Grant stumbles upon a dead man and a cryptic poem about ‘the stones that walk’ and ‘the singing sand,’ which send him off on a fascinating search into the verse’s meaning and the identity of the deceased. Grant needs just this sort of casual inquiry to quiet his jangling nerves, despite his doctor’s orders. But what begins as a leisurely pastime eventually turns into a full-blown investigation that leads Grant to discover not only the key to the poem but the truth about a most diabolical murder.

IT was six o’clock of a March morning, and still dark. The long train came sidling through the scattered lights of the yard, clicking gently over the points. Into the glow of the signal cabin and out again. Under the solitary emerald among the rubies on the signal bridge. On towards the empty grey waste of platform that waited under the arcs.

The London mail at the end of its journey.

Five hundred miles of track lay behind it in the darkness all the way to Euston and last night. Five hundred miles of moonlit fields and sleeping villages; of black towns and unsleeping furnaces; rain, fog, and frost; snow flurry and flood; tunnel and viaduct. Now, in the six o’clock bleakness of a March morning the hills had risen round it and it was coming, casual-seeming and quiet, to rest after its long urgency. And only one person in all its crowded length did not sigh with relief at the realisation.

Of those who sighed two at least sighed with a gladness that bordered on passion. One of these was a passenger, and the other was a railway employee. The passenger was Alan Grant; and the railway employee was Murdo Gallacher.

Murdo Gallacher was a sleeping-car attendant, and the best-hated living creature between Thurso and Torquay. For twenty years Murdo had browbeaten the travelling public into acquiescence and blackmailed them into tribute. Monetary tribute, that is. Their vocal tribute was voluntary. To first-class passengers far and wide he was known as Yughourt. (Oh God, it’s Old Yughourt! they would say as his sour face became visible through the steamy gloom of Euston.) The third-class passengers called him a variety of things, both frank and descriptive. What his colleagues called him is nobody’s business. Only three people had ever got the better of Murdo: a cowhand from Texas, a lance-corporal of the Queen’s Own Cameron Highlanders, and an unknown little Cockney woman in the third-class who had threatened to beat him over his bald head with a lemonade bottle. Neither rank nor achievement impressed Murdo: he hated one and resented the other; but he was greatly afraid of physical pain.

For twenty years Murdo Gallacher had done the absolute minimum. He had been bored by the job before he had been a week at it, but he had found it a rich lode and he had stayed to mine it. If you got morning tea from Murdo the tea would be weak, the biscuit soft, the sugar dirty, the tray slopped, and the spoon missing; but when Murdo came to collect the tray the protests which you had been rehearsing died on your lips. Now and then an Admiral of the Fleet or something like that would venture an opinion that it was damned awful tea, but the ruck smiled and paid up. For twenty years they had paid up, weary and browbeaten and blackmailed. And Murdo had collected. He was now the owner of a villa at Dunoon, a string of fried-fish shops in Glasgow, and a very nice bank balance. He might have retired years ago but he could not bear the thought of losing his full pension; so he endured the boredom a little longer and evened things up by not bothering with early morning teas unless passengers suggested the thing themselves; and sometimes, if he was very sleepy, forgetting about the order anyway. He hailed the end of each journey with the relief of a man who is working out his sentence and has only a short time left.

Alan Grant, watching the lights of the yard float past beyond the steamed-up window and listening to that gentle sound of the wheels clicking over the points, was glad because the end of the journey was the end of a night’s suffering. Grant had spent the night trying not to open the door into the corridor. Wide awake, he had lain on his expensive pallet and sweated by the hour. He had sweated not because the compartment was too hot–the air-conditioning worked to a marvel–but because (O Misery! O Shame! O Mortification!) the compartment represented A Small Enclosed Space. To the normal eye the compartment was just a neat little room with a bunk, a wash-basin, a mirror, luggage racks in assorted sizes, shelves that appeared or disappeared as bidden, a fine little drawer for one’s hypothetical valuables, and a hook for one’s presumably unhocked watch. But to the initiate, the sad and haunted initiate, it was A Small Enclosed Space.

Overwork, the doctor called it.

‘Sit back and browse for a little,’ the doctor had said, crossing one elegant Wimpole Street leg over the other and admiring the hang of it.

Grant could not imagine himself sitting back, and he considered browsing a loathsome word and a contemptible occupation. Browsing. A fattening-up for the table. A mindless satisfaction of animal desires. Browse, indeed! The very sound of the word was an offence. A snore.

‘Have you any hobbies?’ the doctor had asked, his admiring glance going on to his shoes.

‘No,’ Grant had said shortly.

‘What do you do when you go on holiday?’