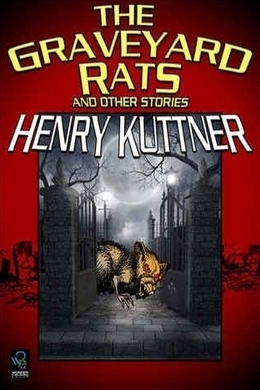 One of Salem’s oldest and most decrepit cemeteries was put in Old Masson’s charge, but he didn’t mind—he was more than sufficiently compensated by the treasures the newly departed wholeheartedly offered him. Unfortunately, he always seemed to have to work harder to earn his keep, for he had an unusual rival to match: rats! The critters, large as cats, often took whole bodies out of the coffins and into some dark, sinister place—where it is rumored that ghouls and evil creatures worse than the rats dwell. Old Masson never worried, though; these were, after all, just rumors … and they were, after all, just rats. Or were they?

Old Masson, the caretaker of one of Salem’s oldest and most neglected cemeteries, had a feud with the rats. Generations ago they had come up from the wharves and settled in the graveyard, a colony of abnormally large rats, and when Masson had taken charge after the inexplicable disappearance of the former caretaker, he decided that they must go. At first he set traps for them and put poisoned food by their burrows, and later he tried to shoot them, but it did no good. The rats stayed, multiplying and overrunning the graveyard with their ravenous hordes.

They were large, even for the mus decumanus, which sometimes measures fifteen inches in length, exclusive of the naked pink and grey tail. Masson had caught glimpses of some as large as good-sized cats, and when, once or twice, the grave-diggers had uncovered their burrows, the malodorous tunnels were large enough to enable a man to crawl into them on his hands and knees. The ships that had come generations ago from distant ports to the rotting Salem wharves had brought strange cargoes.

Masson wondered sometimes at the extraordinary size of these burrows. He recalled certain vaguely disturbing legends he had heard since coming to ancient, witch-haunted Salem—tales of a moribund, inhuman life that was said to exist in forgotten burrows in the earth. The old days, when Cotton Mather had hunted down the evil cults that worshipped Hecate and the dark Magna Mater in frightful orgies, had passed; but dark gabled houses still leaned perilously towards each other over narrow cobbled streets, and blasphemous secrets and mysteries were said to be hidden in subterranean cellars and caverns, where forgotten pagan rites were still celebrated in defiance of law and sanity. Wagging their grey heads wisely, the elders declared that there were worse things than rats and maggots crawling in the unhallowed earth of the ancient Salem cemeteries.

And then, too, there was this curious dread of the rats. Masson disliked and respected the ferocious little rodents, for he knew the danger that lurked in their flashing, needle-sharp fangs; but he could not understand the inexplicable horror which the oldsters held for deserted, rat-infested houses. He had heard vague rumours of ghoulish beings that dwelt far underground, and that had the power of commanding the rats, marshalling them like horrible armies. The rats, the old men whispered, were messengers between this world and the grim and ancient caverns far below Salem. Bodies had been stolen from graves for nocturnal subterranean feasts, they said. The myth of the Pied Piper is a fable that hides a blasphemous horror, and the black pits of Avernus have brought forth hell-spawned monstrosities that never venture into the light of day.

Masson paid little attention to these tales. He did not fraternise with his neighbours, and, in fact, did all he could to hide the existence of the rats from intruders. Investigation, he realised, would undoubtedly mean the opening of many graves. And while some of the gnawed, empty coffins could be attributed to the activities of the rats, Masson might find it difficult to explain the mutilated bodies that lay in some of the coffins.

The purest gold is used in filling teeth, and this gold is not removed when a man is buried. Clothing, of course, is another matter; for usually the undertaker provides a plain broadcloth suit that is cheap and easily recognisable. But gold is another matter; and sometimes, too, there were medical students and less reputable doctors who were in need of cadavers, and not overscrupulous as to where these were obtained.

So far Masson had successfully managed to discourage investigation. He had fiercely denied the existence of the rats, even though they sometimes robbed him of his prey. Masson did not care what happened to the bodies after he had performed his gruesome thefts, but the rats inevitably dragged away the whole cadaver through the hole they gnawed in the coffin.

The size of these burrows occasionally worried Masson. Then, too, there was the curious circumstance of the coffins always being gnawed open at the end, never at the side or top. It was almost as though the rats were working under the direction of some impossibly intelligent leader.

Now he stood in an open grave and threw a last sprinkling of wet earth on the heap beside the pit. It was raining, a slow, cold drizzle that for weeks had been descending from soggy black clouds. The graveyard was a slough of yellow, sucking mud, from which the rain-washed tombstones stood up in irregular battalions. The rats had retreated to their burrows, and Masson had not seen one for days. But his gaunt, unshaved face was set in frowning lines; the coffin on which he was standing was a wooden one.