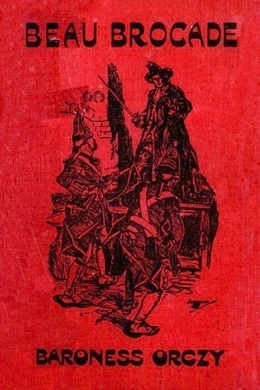 After their recent defeat, the hamlets and villages of Derbyshire are no longer ringing with the wild shouts of Bonny Prince Charlie’s Highland Brigade; instead troops loyal to King George are looking for those accused of high treason and are offering a reward of twenty guineas for the death of any traitor or rebel. Philip James Gascoyne, eleventh Earl of Stretton, is in hiding, in fear for his life after being wrongly accused by Sir Humphrey Challoner of being a traitor to the King… (source: Wikipedia)

The gaffers stood round and shook their heads.

When the Corporal had finished reading the Royal Proclamation, one or two of them sighed in a desultory fashion, others murmured casually, “Lordy! Lordy! to think on it! Dearie me!”

The young ones neither sighed nor murmured. They looked at one another furtively, then glanced away again, as if afraid to read each other’s thoughts, and in a shamefaced manner wiped their moist hands against their rough cord breeches.

There were no women present fortunately: there had been heavy rains on the Moor these last three days, and what roads there were had become well-nigh impassable. Only a few men—some half-dozen perhaps—out of the lonely homesteads from down Brassington way, had tramped in the wake of the little squad of soldiers, in order to hear this Act of Parliament read at the cross-roads, and to see the document duly pinned to the old gallows-tree.

Fortunately the rain had ceased momentarily, only a cool, brisk nor’-wester came blustering across the Heath, making the older men shiver beneath their thin, well-worn smocks.

North and south, east and west, Brassing Moor stretched its mournful lengths to the distant framework of the Peak far away, with mile upon mile of grey-green gorse and golden bracken and long shoots of purple-stemmed bramble, and here and there patches of vivid mauve, where the heather was just bursting into bloom; or anon a clump of dark firs, with ruddy trunks and gaunt arms stretched menacingly over the sparse young life below.

And here, at the cross-roads, the Heath seemed more desolate than ever, despite that one cottage with the blacksmith’s shed beyond it. The roads themselves, the one to Aldwark, the other from Wirksworth, the third little more than a morass, a short cut to Stretton, all bore mute testimony to the remoteness, the aloofness of this forgotten corner of eighteenth-century England.

Then there was the old gallows, whereon many a foot-pad or sheep-stealer had paid full penalty for his crimes! True, John Stich, the blacksmith, now used it as a sign-post for his trade: a monster horseshoe hung there where once the bones of Dick Caldwell, the highwayman, had whitened in the bleak air of the Moor: still, at moments like these, when no one spoke, the wind seemed to bring an echo of ghostly sighs and laughter, for Dick had breathed his last with a coarse jest on his lips, and the ears of the timid seemed still to catch the eerie sound of his horse’s hoofs ploughing the ruddy, shallow soil of the Heath.

For the moment, however, the cross-roads presented a scene of quite unusual animation: the Corporal and his squad looked resplendent in their scarlet tunics and white buckskins, and Mr Inch, the beadle from Brassington, was also there in his gold-laced coat, bob-tailed wig and three-cornered hat: he had lent the dignity of his presence to this solemn occasion, and in high top-boots, bell in hand, had tramped five miles with the soldiers, so that he might shout a stentorian “Oyez! Oyez!” whenever they passed one of the few cottages along the road.

But no one spoke. The Corporal handed the Royal Proclamation to one of the soldiers; he too seemed nervous and ill at ease. The nor’-wester, with singular want of respect for King and Parliament, commenced a vigorous attack upon the great document, pulling at it in wanton frolic, almost tearing it out of the hands of the young soldier, who did his best to fix it against the shaft of the old gallows.

The white parchment looked uncanny and ghost-like fluttering in the wind; no doubt the nor’-wester would soon tear it to rags.

There it was, fixed up at last. Up, so that any chance traveller who could might read. But those who were now assembled there—shepherds, most of them, on the Moor—viewed the written characters with awe and misgiving. They had had Mr Inch’s assurance that it was all writ there, that the King himself had put his name to it; and the young Corporal, who had read it out, had received the document from his own superior officer, who in his turn had had it at the hands of His Grace the Duke of Cumberland himself.