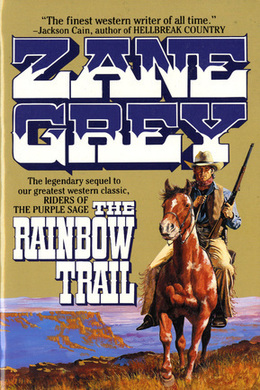 John Shefford rode into Utah’s valley in search of a new life and when he met Fay Larkin, he knew he had found it. Even when she was charged with murder, he did not care. She was worth life itself. Breaking her out of jail was the easy part. After that he has posses to worry about, violent bands of Indians to out run, a murderous trek across a trackless waste, and a brutal passage through white water hell. Busting her out of jail had been a cinch. After that, it got really tough.

A league-long slope of sage rolled and billowed down to Red Lake, a dry red basin, denuded and glistening, a hollow in the desert, a lonely and desolate door to the vast, wild, and broken upland beyond.

All day Shefford had plodded onward with the clear horizon-line a thing unattainable; and for days before that he had ridden the wild bare flats and climbed the rocky desert benches. The great colored reaches and steps had led endlessly onward and upward through dim and deceiving distance.

A hundred miles of desert travel, with its mistakes and lessons and intimations, had not prepared him for what he now saw. He beheld what seemed a world that knew only magnitude. Wonder and awe fixed his gaze, and thought remained aloof. Then that dark and unknown northland flung a menace at him. An irresistible call had drawn him to this seamed and peaked border of Arizona, this broken battlemented wilderness of Utah upland; and at first sight they frowned upon him, as if to warn him not to search for what lay hidden beyond the ranges. But Shefford thrilled with both fear and exultation. That was the country which had been described to him. Far across the red valley, far beyond the ragged line of black mesa and yellow range, lay the wild cañon with its haunting secret.

Red Lake must be his Rubicon. Either he must enter the unknown to seek, to strive, to find, or turn back and fail and never know and be always haunted. A friend’s strange story had prompted his singular journey; a beautiful rainbow with its mystery and promise had decided him. Once in his life he had answered a wild call to the kingdom of adventure within him, and once in his life he had been happy. But here in the horizon-wide face of that up-flung and cloven desert he grew cold; he faltered even while he felt more fatally drawn.

As if impelled Shefford started his horse down the sandy trail, but he checked his former far-reaching gaze. It was the month of April, and the waning sun lost heat and brightness. Long shadows crept down the slope ahead of him and the scant sage deepened its gray. He watched the lizards shoot like brown streaks across the sand, leaving their slender tracks; he heard the rustle of pack-rats as they darted into their brushy homes; the whir of a low-sailing hawk startled his horse.

Like ocean waves the slope rose and fell, its hollows choked with sand, its ridge-tops showing scantier growth of sage and grass and weed. The last ridge was a sand-dune, beautifully ribbed and scalloped and lined by the wind, and from its knife-sharp crest a thin wavering sheet of sand blew, almost like smoke. Shefford wondered why the sand looked red at a distance, for here it seemed almost white. It rippled everywhere, clean and glistening, always leading down.

Suddenly Shefford became aware of a house looming out of the bareness of the slope. It dominated that long white incline. Grim, lonely, forbidding, how strangely it harmonized with the surroundings! The structure was octagon-shaped, built of uncut stone, and resembled a fort. There was no door on the sides exposed to Shefford’s gaze, but small apertures two-thirds the way up probably served as windows and port-holes. The roof appeared to be made of poles covered with red earth.

Like a huge cold rock on a wide plain this house stood there on the windy slope. It was an outpost of the trader Presbrey, of whom Shefford had heard at Flagstaff and Tuba. No living thing appeared in the limit of Shefford’s vision. He gazed shudderingly at the unwelcoming habitation, at the dark eyelike windows, at the sweep of barren slope merging into the vast red valley, at the bold, bleak bluffs. Could any one live here? The nature of that sinister valley forbade a home there, and the spirit of the place hovered in the silence and space. Shefford thought irresistibly of how his enemies would have consigned him to just such a hell. He thought bitterly and mockingly of the narrow congregation that had proved him a failure in the ministry, that had repudiated his ideas of religion and immortality and God, that had driven him, at the age of twenty-four, from the calling forced upon him by his people. As a boy he had yearned to make himself an artist; his family had made him a clergyman; fate had made him a failure. A failure only so far in his life, something urged him to add–for in the lonely days and silent nights of the desert he had experienced a strange birth of hope. Adventure had called him, but it was a vague and spiritual hope, a dream of promise, a nameless attainment that fortified his wilder impulse.