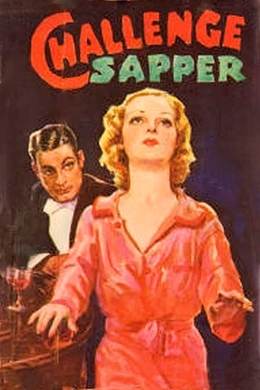 When Colonel Henry Talbot summons Bulldog Drummond and Ronald Standish, it is to inform them of the mysterious death of one of their colleagues. There was no sign of any wound, no trace of any weapon when they found him. But why was millionaire, Charles Burton, near the scene?

Colonel Henry Talbot, C.M.G., D.S.O., pushed back his chair and rose from the dinner table. His wife had gone to the theatre, so that he was alone. And on that particular evening the fact caused him considerable relief. The lady of his bosom was no believer in the old tag that silence is golden.

He crossed the hall and entered his study. There he lit a cigar, and threw his long, spare form into an easy chair. From the dining-room came the faint tinkle of glass as the butler cleared the table; save for that and the ticking of a clock on the mantelpiece the flat was silent.

For perhaps ten minutes he sat motionless staring into the fire. Then he pulled a sheet of paper from his pocket and studied the contents thoughtfully, while a frown came on his forehead. And quite suddenly he spoke out loud.

“It can’t be coincidence.”

A coal fell into the grate, and as he bent over to replace it, the flames danced on his thin aquiline features.

The clock chimed nine, and as the final echo died Sway a bell shrilled out. Came a murmur of voices from the hall; then the butler opened the door.

Colonel Talbot rose, as the two men came into the room.

“Bring the coffee and port in here, Mallows,” he said. “I take it you two fellows have had dinner?”

“We have, Colonel,” said Drummond, coming over to the fire. “And we’re very curious to know the reason of the royal command.”

“I hope it wasn’t inconvenient to either of you?” asked the colonel.

“Not a bit,” answered Standish. “Not only are we curious, but we’re hopeful.”

The colonel laughed; then he grew serious again.

“As a matter of fact I haven’t,” said Drummond. “Have you, Ronald?”

“I only got back to London at eight,” cried Standish. “What’s in ‘em?”

There was a short pause; then Colonel Talbot spoke deliberately.

“What!” The word burst simultaneously from both his listeners. “Jimmy—dead! How? When?”

“Put the tray on my desk, Mallows,” said the colonel. “We’ll help ourselves.”

He waited until the butler had left the room; then standing with his back to the fire he studied the faces of the two men who were still staring at him incredulously.

“A month ago,” he began, “Jimmy put in for leave. Well, you two know what our leave frequently covers, but in this case it was the genuine article. He was going to the South of France, and there was no question of work. I got a letter from him about a fortnight ago, saying he was having a damned good time, and that he’d made a spot of cash at Monte. He also implied that there was a pretty helping him to spend it.

“Last night, about ten o’clock, I got a call through here to my flat from Paris. Jimmy was at the other end. He told me he was on the biggest thing he’d ever handled—so big that he could hardly believe it himself. He was catching the eight-fifty-seven from the St. Lazare Station and crossing via Newhaven. It arrives at Victoria at six o’clock in the morning, and he was coming direct to me here. Couldn’t even wait till I got to the office.

“As you can imagine, I wondered a bit. Jimmy was not a man who went in off the deep end without a pretty good cause. So I ordered Mallows to have some breakfast ready, and to call me the instant jimmy arrived. He never did; when the boat reached Newhaven he was dead in his cabin.”

“My first thought, naturally, when I heard the news,” said the colonel. “Since then we’ve obtained all the information available. He got on board the boat at midnight, and had a whisky and soda at the bar. Then he turned in. He was, apparently, in perfect health and spirits, though the steward in the bar seems to have noticed that he kept on glancing towards the door while he was drinking. Ordinarily that is a piece of evidence which I should discount very considerably. It is the sort of thing that, with the best will in the world, a man might imagine after the event. But in this case he actually mentioned the fact to his assistant last night. So there must have been something in it. And the next thing that was heard of the poor old boy was when his cabin steward called him this morning. He was partially undressed in his bunk, and quite dead.

“When the boat berthed, the police were of course notified. Inspector Dorman, who is an officer of great ability, was in charge of the investigation, and very luckily he knew Jimmy and Jimmy’s job. So the possibility of foul play at once occurred to him. But nothing that he could discover pointed to it. There was no sign of any wound, no trace of any weapon. His kit was, apparently, untouched; his money and watch were in the cubby-hole beside the bunk. In fact, everything seemed to indicate death from natural causes.