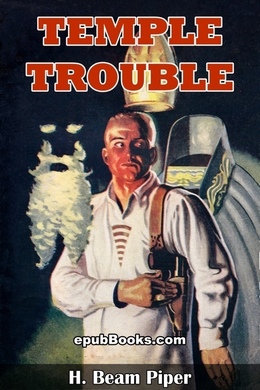 Miracles to order was a fine way for the paratimers to get mining concessions–but Nature can sometimes pull counter-miracles. And so can men, for that matter…

Through a haze of incense and altar smoke, Yat-Zar looked down from his golden throne at the end of the dusky, many-pillared temple. Yat-Zar was an idol, of gigantic size and extraordinarily good workmanship; he had three eyes, made of turquoises as big as doorknobs, and six arms. In his three right hands, from top to bottom, he held a sword with a flame-shaped blade, a jeweled object of vaguely phallic appearance, and, by the ears, a rabbit. In his left hands were a bronze torch with burnished copper flames, a big goblet, and a pair of scales with an egg in one pan balanced against a skull in the other. He had a long bifurcate beard made of gold wire, feet like a bird’s, and other rather startling anatomical features. His throne was set upon a stone plinth about twenty feet high, into the front of which a doorway opened; behind him was a wooden screen, elaborately gilded and painted.

Directly in front of the idol, Ghullam the high priest knelt on a big blue and gold cushion. He wore a gold-fringed robe of dark blue, and a tall conical gold miter, and a bright blue false beard, forked like the idol’s golden one: he was intoning a prayer, and holding up, in both hands, for divine inspection and approval, a long curved knife. Behind him, about thirty feel away, stood a square stone altar, around which four of the lesser priests, in light blue robes with less gold fringe and dark-blue false beards, were busy with the preliminaries to the sacrifice. At considerable distance, about halfway down the length of the temple, some two hundred worshipers–a few substantial citizens in gold-fringed tunics, artisans in tunics without gold fringe, soldiers in mail hauberks and plain steel caps, one officer in ornately gilded armor, a number of peasants in nondescript smocks, and women of all classes–were beginning to prostrate themselves on the stone floor.

Ghullam rose to his feet, bowing deeply to Yat-Zar and holding the knife extended in front of him, and backed away toward the altar. As he did, one of the lesser priests reached into a fringed and embroidered sack and pulled out a live rabbit, a big one, obviously of domestic breed, holding it by the ears while one of his fellows took it by the hind legs. A third priest caught up a silver pitcher, while the fourth fanned the altar fire with a sheet-silver fan. As they began chanting antiphonally, Ghullam turned and quickly whipped the edge of his knife across the rabbit’s throat. The priest with the pitcher stepped in to catch the blood, and when the rabbit was bled, it was laid on the fire. Ghullam and his four assistants all shouted together, and the congregation shouted in response.

The high priest waited as long as was decently necessary and then, holding the knife in front of him, stepped around the prayer-cushion and went through the door under the idol into the Holy of Holies. A boy in novice’s white robes met him and took the knife, carrying it reverently to a fountain for washing. Eight or ten under-priests, sitting at a long table, rose and bowed, then sat down again and resumed their eating and drinking. At another table, a half-dozen upper priests nodded to him in casual greeting.

Crossing the room, Ghullam went to the Triple Veil in front of the House of Yat-Zar, where only the highest of the priesthood might go, and parted the curtains, passing through, until he came to the great gilded door. Here he fumbled under his robe and produced a small object like a mechanical pencil, inserting the pointed end in a tiny hole in the door and pressing on the other end. The door opened, then swung shut behind him, and as it locked itself, the lights came on within. Ghullam removed his miter and his false beard, tossing them aside on a table, then undid his sash and peeled out of his robe. His regalia discarded, he stood for a moment in loose trousers and a soft white shirt, with a pistollike weapon in a shoulder holster under his left arm–no longer Ghullam the high priest of Yat-Zar, but now Stranor Sleth, resident agent on this time-line of the Fourth Level Proto-Aryan Sector for the Transtemporal Mining Corporation. Then he opened a door at the other side of the anteroom and went to the antigrav shaft, stepping over the edge and floating downward.