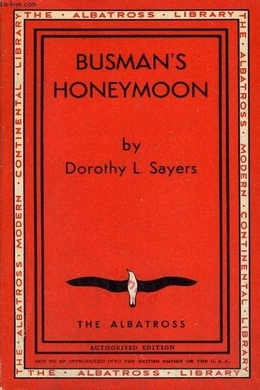 A Love Story with Detective Interruptions

Lord Peter Wimsey and his bride, mystery writer Harriet Vane, start their honeymoon with murder. The former owner of Tallboys estate is dead in the cellar with a misspelled “notise” to the milkman, not a spot of blood on his smashed skull, and £600 in his pocket.

Mr. Mervyn Bunter, patiently seated in the Daimler on the far side of Regent’s Park, reflected that time was getting on. Packed in eiderdowns in the back of the car was a case containing two and a half dozen of vintage port, and he was anxious about it. Great speed would render the wine undrinkable for a fortnight; excessive speed would render it undrinkable for six months. He was anxious about the arrangements–or the lack of them–at Talboys. He hoped everything would be found in good order when they arrived–otherwise, his lady and gentleman might get nothing to eat till goodness knew when. True, he had brought ample supplies from Fortnum’s, but suppose there were no knives or forks or plates available? He wished he could have gone ahead, as originally instructed, to see to things. Not but what his lordship was always ready to put up with what couldn’t be helped; but it was unsuitable that his lordship should be called on to put up with anything–besides, the lady was still, to some extent, an unknown factor. What his lordship had had to put up with from her during the past five or six years, only his lordship knew, but Mr. Bunter could guess. True, the lady seemed now to be in a very satisfactory way of amendment; but it was yet to be ascertained what her conduct would be under the strain of trivial inconvenience. Mr. Bunter was professionally accustomed to judge human beings by their behaviour, not in great crises, but in the minor adjustments of daily life. He had seen one lady threatened with dismissal from his lordship’s service (including all emoluments and the enjoyment of an appartement meublé, Ave. Kléber) for having, in his presence, unreasonably lost her temper with a lady’s maid; but wives were not subject to peremptory dismissal. Mr. Bunter was anxious, also, about how things were going at the Dowager’s; he did not really believe that anything could be suitably organised or carried out without his assistance.

He was unspeakably relieved to see the taxi arrive and to assure himself that there was no newspaper man perched on the spare wheel, or lurking in a following vehicle.

“Here we are, Bunter. All serene? Good man. I’ll drive. Sure you won’t be cold, Harriet?”

Mr. Bunter tucked a rug about the bride’s knees.

“Your lordship will bear in mind that we are conveying the port?”

“I will go as gingerly as if it were a baby in arms. What’s the matter with the rug?”

“A few grains of cereal, my lord. I have taken the liberty of removing approximately a pound and three-quarters from among the hand-luggage, together with a quantity of assorted footgear.”

“That must have been Lord Saint-George,” said Harriet.

“Presumably so, my lady.”

“My lady”–she had never really thought it possible that Bunter would accept the situation. Everybody else, perhaps, but not Bunter. Yet apparently he did. And that being so, the incredible must have happened. She must be actually married to Peter Wimsey. She sat looking at Peter, as the car twisted smoothly in and out of the traffic. The high, beaked profile, and the long hands laid on the wheel had been familiar to her for a long time now; but they were suddenly the face and hands of a stranger. (Peter’s hands, holding the keys of hell and heaven…that was the novelist’s habit, of thinking of everything in terms of literary allusions.)

“I was just wondering whether I should recognise your voice–your face seems to have got rather remote, somehow.”

She saw the corner of his long mouth twitch.

“Not quite the same person?”

“Don’t worry,” he said, imperturbably, “it’ll be all right on the night.”

Too much experience to be surprised, and too much honesty to pretend not to understand. She remembered what had happened four days earlier. He had brought her home after the theatre, and they were standing before the fire, when she had said something–quite casually, laughing at him. He had turned and said, suddenly and huskily:

Language and voice together had been like a lightning-flash, showing up past and future in a single crack of fire that hurt your eyes and was followed by a darkness like thick, black velvet…. When his lips had reluctantly freed themselves, he had said:

“I’m sorry. I didn’t mean to wake the whole zoo. But I’m glad, my God! to know it’s there–and no shabby tigers either.”

“Did you think mine would be a shabby tiger?”

“I thought it might, perhaps, be a little daunted.”

“Well, it isn’t. It seems to be an entirely new tiger. I never had one before–only kindness to animals.”