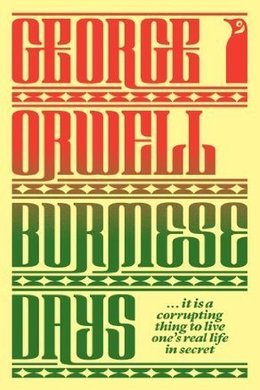 Set in the days of the Empire, with the British ruling in Burma, Burmese Days describes both indigenous corruption and Imperial bigotry, when ‘after all, natives were natives ? interesting, no doubt, but finally only a subject people, an inferior people with black faces’. Against the prevailing orthodoxy, Flory, a white timber merchant, befriends Dr Veraswami, a black enthusiast for Empire. The doctor needs help. U Po Kyin, sub-divisional Magistrate of Kyauktada, is plotting his downfall. The only thing that can save him is European patronage: membership of the hitherto all-white Club. While Flory prevaricates, beautiful Elizabeth Lackersteen arrives in Upper Burma from Paris. At last, after years of ‘solitary hell’, romance and marriage appear to offer Flory an escape from the ‘lie’ of the ‘pukka sahib pose’.

U Po Kyin, Sub-divisional Magistrate of Kyauktada, in Upper Burma, was sitting in his veranda. It was only half past eight, but the month was April, and there was a closeness in the air, a threat of the long, stifling midday hours. Occasional faint breaths of wind, seeming cool by contrast, stirred the newly drenched orchids that hung from the eaves. Beyond the orchids one could see the dusty, curved trunk of a palm tree, and then the blazing ultramarine sky. Up in the zenith, so high that it dazzled one to look at them, a few vultures circled without the quiver of a wing.

Unblinking, rather like a great porcelain idol, U Po Kyin gazed out into the fierce sunlight. He was a man of fifty, so fat that for years he had not risen from his chair without help, and yet shapely and even beautiful in his grossness; for the Burmese do not sag and bulge like white men, but grow fat symmetrically, like fruits swelling. His face was vast, yellow and quite unwrinkled, and his eyes were tawny. His feet–squat, high-arched feet with the toes all the same length–were bare, and so was his cropped head, and he wore one of those vivid Arakanese longyis with green and magenta checks which the Burmese wear on informal occasions. He was chewing betel from a lacquered box on the table, and thinking about his past life.

It had been a brilliantly successful life. U Po Kyin’s earliest memory, back in the eighties, was of standing, a naked pot-bellied child, watching the British troops march victorious into Mandalay. He remembered the terror he had felt of those columns of great beef-fed men, red-faced and red-coated; and the long rifles over their shoulders, and the heavy, rhythmic tramp of their boots. He had taken to his heels after watching them for a few minutes. In his childish way he had grasped that his own people were no match for this race of giants. To fight on the side of the British, to become a parasite upon them, had been his ruling ambition, even as a child.

At seventeen he had tried for a Government appointment, but he had failed to get it, being poor and friendless, and for three years he had worked in the stinking labyrinth of the Mandalay bazaars, clerking for the rice merchants and sometimes stealing. Then when he was twenty a lucky stroke of blackmail put him in possession of four hundred rupees, and he went at once to Rangoon and bought his way into a Government clerkship. The job was a lucrative one though the salary was small. At that time a ring of clerks were making a steady income by misappropriating Government stores, and Po Kyin (he was plain Po Kyin then: the honorific U came years later) took naturally to this kind of thing. However, he had too much talent to spend his life in a clerkship, stealing miserably in annas and pice. One day he discovered that the Government, being short of minor officials, were going to make some appointments from among the clerks. The news would have become public in another week, but it was one of Po Kyin’s qualities that his information was always a week ahead of everyone else’s. He saw his chance and denounced all his confederates before they could take alarm. Most of them were sent to prison, and Po Kyin was made an Assistant Township Officer as the reward of his honesty. Since then he had risen steadily. Now, at fifty-six, he was a Sub-divisional Magistrate, and he would probably be promoted still further and made an acting Deputy Commissioner, with Englishmen as his equals and even his subordinates.