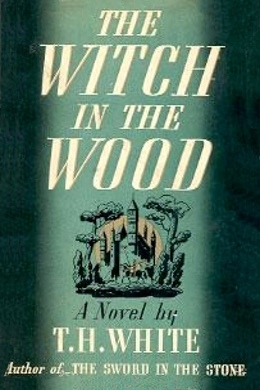 The Witch in the Wood

The Queen of Air and Darkness

The Queen of Air and Darkness, is the second book in T. H. White’s epic work; The Once and Future King. It continues the story of the newly-crowned King Arthur, his tutelage by the wise Merlyn, his war against King Lot, and also introduces the Orkney clan, a group of characters who would cause the eventual downfall of the King.

There was a round tower with a weather-cock on it. The weather-cock was a carrion crow, with an arrow in its beak to point to the wind.

There was a circular room at the top of the tower, curiously uncomfortable. It was draughty. There was a closet on the east side which had a hole in the floor. This hole commanded the outer doors of the tower, of which there were two, and people could drop stones through it when they were besieged. Unfortunately the wind used to come up through the hole and go pouring out of the unglazed shot-windows or up the chimney–unless it happened to be blowing the other way, in which case it went downward. It was like a wind tunnel. A second nuisance was that the room was full of peat-smoke, not from its own fire but from the fire in the room below. The complicated system of draughts sucked the smoke down the chimney. The stone walls sweated in damp weather. The furniture itself was uncomfortable. It consisted solely of heaps of stones–which were handy for throwing down the hole–together with a few rusty Genoese cross-bows with their bolts and a pile of turfs for the unlit fire. The four children had no bed. If it had been a square room, they might have had a cupboard bed, but, as it was, they had to sleep on the floor–where they covered themselves with straw and plaids as best they could.

The children had erected an amateur tent over their heads, out of the plaids, and under this they were lying close together, telling a story. They could hear their mother stoking the fire in the room below, which made them whisper for fear that she could hear. It was not exactly that they were afraid of being beaten if she came up. They adored her dumbly and uncritically, because her character was stronger than theirs. Nor had they been forbidden to talk after bedtime. It was more as if she had brought them up–perhaps through indifference or through laziness or even through some kind of possessive cruelty–with an imperfect sense of right and wrong. It was as if they could never know when they were being good or when they were being bad.

They were whispering in Gaelic. Or rather, they were whispering in a strange mixture of Gaelic and of the Old Language of chivalry–which had been taught to them because they would need it when they were grown. They had little English. In later years, when they became famous knights at the court of the great king, they were to speak English perfectly–all of them except Gawaine, who, as the head of the clan, was to cling to a Scots accent on purpose, to show that he was not ashamed of his birth.

Gawaine was telling the story, because he was the eldest. They lay together, like thin, strange, secret frogs, their bodies well-boned and ready to fill out into toughness as soon as they might be given decent nourishment. They were fair-haired. Gawaine’s was bright red and Gareth’s whiter than hay. They ranged from ten years old to fourteen, and Gareth was the youngest of the four. Gaheris was a stolid child. Agravaine, the next after Gawaine, was the bully of the family–he was shifty, inclined to cry, and frightened of pain. It was because he had a good imagination and used his head more than the others.

“Long time past, my heroes,” Gawaine was saying, “before ourselves were born or thought of, there was a beautiful grandmother at us, called Igraine.”

“She is the Countess of Cornwall,” said Agravaine.

“Our grandmother is the Countess of Cornwall,” agreed Gawaine, “and the bloody King of England fell in love with her.”

“Who is at telling this story?” asked Gareth angrily. “Close your mouth.”

“Our Grandfather and Granny,” said Gaheris.

”–and he proclaimed to them that they must stay with him at his house in the Tower of London. Then, when they were at staying with him therein, he asked our Granny that she would become the wife of himself, instead of being with our Grandfather at all. But the chaste and beautiful Countess of Cornwall—-“

Gareth exclaimed: “Sorrow take it, will you give us peace?” There was a muffled argument, punctuated by squeaks, bumps and complaining remarks.

“The chaste and beautiful Countess of Cornwall,” resumed Gawaine, “spurned the advances of King Uther Pendragon, and she told our Grandfather about it. She said: ‘I suppose we were sent for that I should be dishonoured. Wherefore, husband, I counsel you that we depart from hence suddenly, that we may ride all night to our own castle.’ So they went out of the King’s rath in the middle night—-“

“At dead of night,” Gareth corrected.