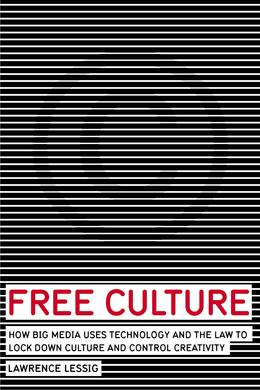 Lawrence Lessig, “the most important thinker on intellectual property in the Internet era”, masterfully argues that never before in human history has the power to control creative progress been so concentrated in the hands of the powerful few, the so-called Big Media. Never before have the cultural powers- that-be been able to exert such control over what we can and can’t do with the culture around us. Our society defends free markets and free speech; why then does it permit such top-down control? To lose our long tradition of free culture, Lawrence Lessig shows us, is to lose our freedom to create, our freedom to build, and, ultimately, our freedom to imagine.

Since the inception of the law regulating creative property, there has been a war against “piracy.” The precise contours of this concept, “piracy,” are hard to sketch, but the animating injustice is easy to capture. As Lord Mansfield wrote in a case that extended the reach of English copyright law to include sheet music,

A person may use the copy by playing it, but he has no right to rob the author of the profit, by multiplying copies and disposing of them for his own use.”

The warriors have turned to the courts, to the legislatures, and increasingly to technology to defend their “property” against this “piracy.” A generation of Americans, the warriors warn, is being raised to believe that “property” should be “free.” Forget tattoos, never mind body piercing–our kids are becoming thieves!

There’s no doubt that “piracy” is wrong, and that pirates should be punished. But before we summon the executioners, we should put this notion of “piracy” in some context. For as the concept is increasingly used, at its core is an extraordinary idea that is almost certainly wrong.

This view runs deep within the current debates. It is what NYU law professor Rochelle Dreyfuss criticizes as the “if value, then right” theory of creative property–if there is value, then someone must have a right to that value. It is the perspective that led a composers’ rights organization, ASCAP, to sue the Girl Scouts for failing to pay for the songs that girls sang around Girl Scout campfires. There was “value” (the songs) so there must have been a “right”–even against the Girl Scouts.

Instead, in our tradition, intellectual property is an instrument. It sets the groundwork for a richly creative society but remains subservient to the value of creativity. The current debate has this turned around. We have become so concerned with protecting the instrument that we are losing sight of the value.

The source of this confusion is a distinction that the law no longer takes care to draw–the distinction between republishing someone’s work on the one hand and building upon or transforming that work on the other. Copyright law at its birth had only publishing as its concern; copyright law today regulates both.