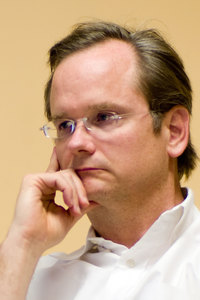 Lawrence “Larry” Lessig is an American academic and political activist. He is a proponent of reduced legal restrictions on copyright, trademark, and radio frequency spectrum, particularly in technology applications, and he has called for state-based activism to promote substantive reform of government with a Second Constitutional Convention. In May 2014, he launched a crowd-funded political action committee which he termed Mayday PAC with the purpose of electing candidates to Congress who would pass campaign finance reform.

Lessig is director of the Edmond J. Safra Center for Ethics at Harvard University and a professor of law at Harvard Law School. Previously, he was a professor of law at Stanford Law School and founder of the Center for Internet and Society. Lessig is a founding board member of Creative Commons and the founder of Rootstrikers, and is on the board of MapLight. He is on the advisory boards of the Democracy Café, Sunlight Foundation and Americans Elect. He is a former board member of the Free Software Foundation, Software Freedom Law Center and the Electronic Frontier Foundation. (source: Wikipedia)

Lawrence Lessig, “the most important thinker on intellectual property in the Internet era”, masterfully argues that never before in human history has th...read more »

In an era when special interests funnel huge amounts of money into our government-driven by shifts in campaign-finance rules and brought to new levels b...read more »