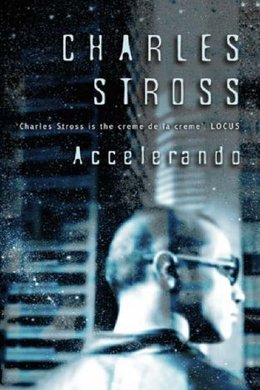 His most ambitious novel to date, Accelerando is a multi-generational saga following a brilliant clan of 21st-century posthumans. The year is some time between 2010 and 2015. The recession has ended, but populations are ageing and the rate of tech change is accelerating dizzyingly. Manfred makes his living from spreading ideas around, putting people in touch with one another and leaving a spray of technologies in his wake. He lives at the cutting edge of intelligence amplification technology, but even Manfred can take on too much. And when his pet robot cat picks up some interesting information from the SETI data, his world - and the world of his descendants - is turned on its head.

It’s a hot summer Tuesday, and he’s standing in the plaza in front of the Centraal Station with his eyeballs powered up and the sunlight jangling off the canal, motor scooters and kamikaze cyclists whizzing past and tourists chattering on every side. The square smells of water and dirt and hot metal and the fart-laden exhaust fumes of cold catalytic converters; the bells of trams ding in the background, and birds flock overhead. He glances up and grabs a pigeon, crops the shot, and squirts it at his weblog to show he’s arrived. The bandwidth is good here, he realizes; and it’s not just the bandwidth, it’s the whole scene. Amsterdam is making him feel wanted already, even though he’s fresh off the train from Schiphol: He’s infected with the dynamic optimism of another time zone, another city. If the mood holds, someone out there is going to become very rich indeed.

He wonders who it’s going to be.

Manfred sits on a stool out in the car park at the Brouwerij ‘t IJ, watching the articulated buses go by and drinking a third of a liter of lip-curlingly sour gueuze. His channels are jabbering away in a corner of his head-up display, throwing compressed infobursts of filtered press releases at him. They compete for his attention, bickering and rudely waving in front of the scenery. A couple of punks – maybe local, but more likely drifters lured to Amsterdam by the magnetic field of tolerance the Dutch beam across Europe like a pulsar – are laughing and chatting by a couple of battered mopeds in the far corner. A tourist boat putters by in the canal; the sails of the huge windmill overhead cast long, cool shadows across the road. The windmill is a machine for lifting water, turning wind power into dry land: trading energy for space, sixteenth-century style. Manfred is waiting for an invite to a party where he’s going to meet a man he can talk to about trading energy for space, twenty-first-century style, and forget about his personal problems.

He’s ignoring the instant messenger boxes, enjoying some low-bandwidth, high-sensation time with his beer and the pigeons, when a woman walks up to him, and says his name: “Manfred Macx?”

He glances up. The courier is an Effective Cyclist, all wind-burned smooth-running muscles clad in a paean to polymer technology: electric blue lycra and wasp yellow carbonate with a light speckling of anti collision LEDs and tight-packed air bags. She holds out a box for him. He pauses a moment, struck by the degree to which she resembles Pam, his ex-fiance.

“I’m Macx,” he says, waving the back of his left wrist under her bar-code reader. “Who’s it from?”

“FedEx.” The voice isn’t Pam’s. She dumps the box in his lap, then she’s back over the low wall and onto her bicycle with her phone already chirping, disappearing in a cloud of spread-spectrum emissions.

Manfred turns the box over in his hands: it’s a disposable supermarket phone, paid for in cash – cheap, untraceable, and efficient. It can even do conference calls, which makes it the tool of choice for spooks and grifters everywhere.

The box rings. Manfred rips the cover open and pulls out the phone, mildly annoyed. “Yes? Who is this?”

The voice at the other end has a heavy Russian accent, almost a parody in this decade of cheap on-line translation services. “Manfred. Am please to meet you. Wish to personalize interface, make friends, no? Have much to offer.”

“Who are you?” Manfred repeats suspiciously.

“I think your translator’s broken.” He holds the phone to his ear carefully, as if it’s made of smoke-thin aerogel, tenuous as the sanity of the being on the other end of the line.

“Nyet – no, sorry. Am apologize for we not use commercial translation software. Interpreters are ideologically suspect, mostly have capitalist semiotics and pay-per-use APIs. Must implement English more better, yes?”

Manfred drains his beer glass, sets it down, stands up, and begins to walk along the main road, phone glued to the side of his head. He wraps his throat mike around the cheap black plastic casing, pipes the input to a simple listener process. “Are you saying you taught yourself the language just so you could talk to me?”